Rare Photo Is a Teenage van Gogh, but Not Vincent 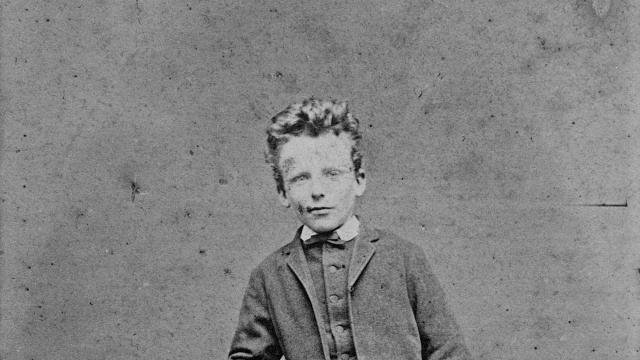 AMSTERDAM — Vincent van Gogh may have been quite fond of painting his own portrait, but he was far fussier about his real-life image. For years, only two photographs of his face were known to exist.

Now, that number is down to one.

A photographic portrait long believed to be of a teenage Vincent is not him at all, but rather his brother Theo, researchers at the Van Gogh Museum in Amsterdam announced on Thursday.

The photograph, taken in a studio in Brussels in the 1870s, was thought to be an image of the artist at 13 and has been displayed as such since a Belgian historian first publicized it in 1957. But a recent investigation by the museum, which owns the photograph, and a forensic scientist at the University of Amsterdam, found that it could not have been Vincent.

“It was the archetype portrait of the artist as a young boy and it has been used all over the world as the Vincent youth portrait,” said Teio Meedendorp, a senior researcher at the Van Gogh Museum. “It will be hard to get it out of the system, and that’s part of the reason that we brought this news into the open, because it will likely keep on popping up as the image of Vincent for some time.”

The only remaining photographic portrait that experts believe is the artist is one taken when he was 19 at a photo studio in The Hague.

Researchers at the museum also believe that Vincent van Gogh appears in a third photograph, a blurry image of artist Émile Bernard, van Gogh’s good friend, seated at a table. The figure across from him is believed to be van Gogh, but the photo shows him only from the back.

All the other known images of van Gogh are paintings, including some 30 self-portraits, and a few portraits of him by other artists, including Paul Gauguin.

Some photos claimed to be of van Gogh as an adult have circulated over the years, but experts have cast doubt on them.

“Vincent was not very keen on the medium of photography and didn’t like having his photograph taken,” Meedendorp said. “It seems like he avoided it. We have six or seven photos from Theo of different ages and we know of several photos of other family members. With Vincent there is now only one.”

The misidentified photograph was first displayed in 1957 at an exhibition organized by Belgian art historian Mark Edo Tralbaut, who identified the image as Vincent at 13. For more than half a century, it went unquestioned.

But in 2014, a Dutch television program tried to use experimental imaging technologies to age-morph the image believed to be of Vincent at 13 into the image of Vincent at 19. The effort was unsuccessful, suggesting that perhaps they were not the same person.

The museum’s researchers decided to explore the history of the photo, and found that it was shot by a photographer named B. Schwarz, who moved to Brussels and set up a studio there in 1870. At that point, Vincent was already 17 and living in The Hague, so it was unlikely that the photo could be Vincent at 13.

However, researchers knew that his younger brother Theo moved to Brussels in 1873 at 15, to start work for the Belgian branch of the international art dealer Goupil & Cie. The museum now thinks that the portrait of Theo was probably taken as a birthday gift to their father in 1873. The brothers looked alike, but Theo was more slender, had more delicate features and had light-blue eyes, more evidence suggesting the photo was of him and not Vincent. The photo bears a strong resemblance to one taken of Theo two years earlier in Amsterdam.

The Van Gogh Museum keeps the original photograph in storage, because it is fragile and light sensitive, but it displays a copy of the image in its galleries, in a section devoted to van Gogh’s biography. Meedendorp said the museum will now move the image, and identify it as Theo.

“We lost an image of Vincent, but we gained an image of Theo, so you can see it in a certain kind of positive light,” said Meedendorp.