Rapper’s Legacy Sets Off a Battle 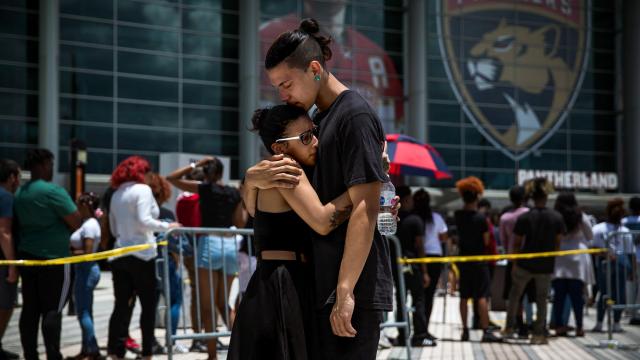 To hear his friends and collaborators describe him, singer and rapper XXXTentacion was an inspirational legend in the making at the time of his death.

Last month, to promote his clothing line, Bad Vibes Forever, his mother appeared in an Instagram video to say “his message was essentially to heal” and that he was “spreading love and light to the world.” A week later, a news release for a major-label single called him the “voice of his generation.”

“He’s going to go down as a Tupac,” Sebastian Baldeon, a producer, DJ and songwriter known as Diablo, who worked with XXXTentacion when they were both starting out in South Florida, said in an interview. “The music he was putting out was so good, and so beautiful, and the fact that he was taken from society and his family and his friends left such a big impact on people.”

XXXTentacion, born Jahseh Onfroy, had built a huge audience before he was fatally shot during an attempted robbery in Deerfield Beach, Florida, in June. His first two official albums generated nearly 5.5 billion streams, according to Nielsen Music, and he had more than 8 million Instagram followers hanging on to every word of his posts and stories, which like his music, were emotional missives that addressed depression and anger. He was just 20 when he died.

But he was also awaiting trial on charges of battery, false imprisonment and witness tampering, and his accuser — an ex-girlfriend who prosecutors said was pregnant during some of the suspected abuse — said in a deposition that he threatened to kill her “literally like every day.” Since XXXTentacion’s death, what was once a moral debate over the music industry’s complicity in his rise to stardom has turned into a battle over his legacy. In the lead-up to the release of his first posthumous album, “Skins,” on Friday, his team has hit the media circuit working to portray him as a martyr, not a monster.

“Skins” comes with a guest appearance from Kanye West, a vocal admirer, and a striking marketing campaign. Since XXXTentacion’s death, his mother, Cleopatra Bernard, along with his manager and entertainment lawyer, have collected industry awards on his behalf and discussed his artistic gifts in interviews. They declined to comment for this article.

The team has also tended to XXXTentacion’s still-rabid fan base, posting an apparent ultrasound image of the rapper’s son and spreading the hashtag #LLJ, or Long Live Jahseh. Fans have used the tag to share hundreds of loving photos and clips, including one this week asking him to “watch over” George Bush. Listeners are vying to win a $10,000 contest to design an animated video for the single “Bad!,” with one entry depicting a larger-than-life XXXTentacion crackling with lightning. The album will have a premiere party during Art Basel in Miami.

Artists such as James Brown, Gene Simmons and R. Kelly maintained successful music careers despite facing accusations of misconduct or violence. XXXTentacion was accused of visceral and disturbing behavior; news of the charges coincided with his rise to fame, and he seemed to defend himself and criticize his accuser in songs like “Moonlight” and “Numb.” After his death, recordings emerged from around the time of his 2016 arrest, in which he took responsibility for stabbings and seemed to admit to abusing his former girlfriend, among other violent acts.

Hilary Rosen, a former chairwoman of the Recording Industry Association of America who is now a political commentator, said XXXTentacion’s music is “rooted in such a horrible reality and inextricable from his personal behavior that makes it a moral dilemma just to listen to him.” She added, “I am appalled that there has been so little condemnation of his behavior from the industry.”

Katie Ray-Jones, the chief executive officer of the National Domestic Violence Hotline, said, “It’s discouraging when people who have a history of being abusive are then idolized.”

Earlier this year, while XXXTentacion was alive, Universal Music Group’s Capitol and Caroline divisions distributed his album “?,” but “Skins” is an independent release from the Bay Area distributor Empire as part of a $10 million contract the rapper signed weeks before his death. And while Universal announced a deal in April for Empire to distribute “select artist projects,” the label has, for unknown reasons, no apparent stake in “Skins.”

Representatives for XXXTentacion, Empire and Universal declined to comment.

Empire will distribute physical copies of “Skins” through Alliance Entertainment, a Sunrise, Florida, music company. “Independent companies generally allow for freedom for the artist to make the music that he wants,” said Pip Smith, the vice president for sales for Amped, the Alliance division that is distributing “Skins.” “Filters aren’t in place so much.”

Some in the music business have, at least tepidly, pushed back. In May, Spotify unveiled a “hate content and hateful content” policy, abruptly pulling his music, along with that of Kelly, from its curated playlists. Record executives, including Anthony Tiffith, the chief executive of rapper Kendrick Lamar’s label, said it wasn’t appropriate to police the behavior of certain artists, and Spotify backed off the policy weeks later.

Both Spotify and Apple Music declined to comment on plans for “Skins,” but “Bad!” appears on Spotify’s influential RapCaviar playlist and on Apple Music’s rap spotlight, The A-List playlist.

The Grammy Awards, still reeling after criticism about the show’s lack of gender and racial diversity, have potentially sidestepped an XXXTentacion firestorm. He will not qualify for the best new artist award for technical reasons — he released too many singles and albums to qualify under academy rules. But “?,” released in March, will be eligible for nominations in other categories. Representatives for the Recording Academy declined to comment. A record executive who spoke anonymously because his major label did not authorize him to do so said XXXTentacion’s personal behavior may have been “controversial and toxic enough” to dissuade the world’s biggest record companies from distributing “Skins.”

Still, the domestic-abuse allegations were widely known when Universal helped put out “?” during his life — it hit No. 1 on the charts and, according to Nielsen Music, its songs have streamed more than three billion times. Universal’s merchandise division, Bravado, also partnered on the clothing line that XXXTentacion designed; Warner released “Arms Around You,” the posthumous single with Lil Pump, Maluma and Rae Sremmurd’s Swae Lee; and Columbia Records put out “Falling Down,” another posthumous single, with Lil Peep, in September.

Representatives for each of those companies declined to comment.

“I don’t see a lot of people in the industry willing to speak out about these things,” Rosen said.

The comedian Eric Andre was among many on social media who have criticized XXXTentacion’s behavior, and rapper Vic Mensa freestyled a verse at the BET Awards rhyming “loser” with “domestic abuser” in a taped clip. (Mensa later apologized, not for his words but for making the statement in front of XXXTentacion’s family members, who were at the show.) XXXTentacion’s supporters have been equally passionate: In a Twitter post after his death, rapper Jidenna likened XXXTentacion to Malcolm X, who also engaged in violent behavior in his early days, concluding, “I believe in change for the young.”

In a Miami New Times interview shortly before his death, XXXTentacion recalled growing up under difficult circumstances, saying he fought students at school to make his mother notice him. Expelled from middle school, he was enrolled in a troubled-youth program. Some in the music business are sympathetic to his past; Rosen is among those who suggested his team should donate to survivors’ groups. (XXXTentacion’s team set up a nonprofit organization and is soliciting donations via his website, though it does not list specific charitable causes.)

Jonathan Hay, a Los Angeles crisis publicist, said that XXXTentacion’s team was “doing the right thing as far as business and promoting the brand.” But, he added, “They have a platform right now with X where they can do something to do some good.”