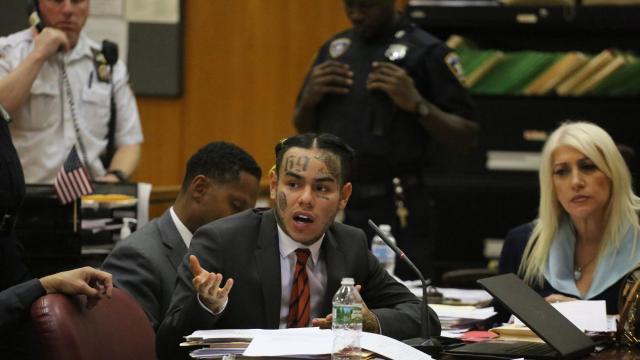 NEW YORK — The New York rapper and Instagram star known as 6ix9ine, whose talent as a performer is often overshadowed by a magnetic attraction to trouble, was part of a violent gang that sold drugs, robbed rivals and shot at people who crossed them, according to a federal indictment unsealed Monday.

The 22-year-old rapper, whose given name is Daniel Hernandez, was charged along with five men, some of whom were once part of his management team, including Kifano Jordan, known as Shottie.

Hernandez and Jordan were part of a gang known as the Nine Trey Gangsta Bloods, and committed a series of violent crimes and drug-trafficking offenses, including attempted murder and armed robbery, the indictment said. In one instance, a plan to shoot someone who had been disrespectful to the group led to a July 16 shooting of an innocent bystander in the Bedford-Stuyvesant neighborhood of Brooklyn, in New York. On April 21, one of the men shot at a rival inside the Barclays Center, but no one was hit.

Gang members also robbed a man at gunpoint in Times Square in April, in an attack that prosecutors said was directed, and filmed, by Hernandez himself.

“This gang, which included platinum-selling rap artist Tekashi 6ix9ine, wreaked havoc on New York City, engaging in brazen acts of violence,” Geoffrey Berman, the U.S. attorney in Manhattan, said in a statement, referring to Hernandez by another stage name he has used.

Investigators from the New York Police Department and two federal agencies — Alcohol, Tobacco, Firearms and Explosives and Homeland Security Investigations — were involved in the case.

Hernandez and four of the five other men appeared in U.S. District Court in Manhattan on Monday and were ordered jailed without bail by Magistrate Judge Henry Pittman.

They did not enter pleas, though Hernandez’s lawyer, Lance Lazzaro, portrayed his client as a target, not a ringleader, of the gang, saying that the FBI had warned him Saturday that his safety was in danger.

Monday’s charges are the most serious in a series of legal problems for Hernandez, who has spent the past two years creating a divisive brand for himself. One of the charges he faces carries a minimum prison sentence of 25 years, if he is convicted.

Just last week Hernandez pleaded guilty to disorderly conduct charges stemming from an incident with a police officer in Brooklyn earlier this year. Last month, he was sentenced to four years’ probation — including requirements that he stop affiliating with known gang members — after he pleaded guilty to using a child in a sexual performance.

Hernandez had participated in a video that featured a 13-year-old girl performing a sex act, which he then posted online, prosecutors said. Hernandez, then 18, said at the time that he did not know the girl’s age and told police that his “persona is just for shock value.”

In deciding to deny him bail Monday, Pittman noted that when the FBI raided an apartment Hernandez had been renting in September, agents found an AR-15 firearm and a backpack containing credit cards and identification of the man robbed in Times Square. The judge called the discovery of the stolen goods “compelling evidence corroborating his involvement” and the firearm “very troubling.”

Hernandez’s career had seemed destined for success. He had built a following on SoundCloud and Instagram, where he has 15 million followers. His debut single, “Gummo,” went platinum and reached No. 12 on the Billboard Hot 100 chart.

Three subsequent songs cracked the Top 50, including “Fefe,” with Nicki Minaj, which also went platinum and peaked at No. 3. His debut album, “DAY69,” came out in February and reached No. 4 on the Billboard album chart.

Over the weekend, Hernandez announced that his follow-up album, “Dummy Boy,” would be released Friday and feature two songs with the musician Kanye West.

But his buzz in the industry came with, and was intensified by, a dark cloud of internet beef that often metastasized into violence.

In October, just hours after he was sentenced to probation in the video case, he went to a restaurant on Manhattan’s Upper East Side to meet the head of his record label. A melee broke out, and a bodyguard for Hernandez fired a gun. Jordan was charged with assault in connection with the melee.

The man injured in the shooting, Faheem Walter, known as Crippy, was also charged in the gang indictment unsealed Monday.

Earlier this month, just two weeks after the restaurant shooting, there was a shooting at a home in Beverly Hills, California, where Hernandez was filming a music video set to feature West and Minaj. In August, shots were fired during the filming of a music video in Greenpoint, Brooklyn, starring Hernandez and the rapper 50 Cent.

In July, Hernandez was kidnapped and robbed in Brooklyn. Though he said he would decline to cooperate with police in that investigation, a former member of his management team was arrested and charged with the robbery this month.

Hernandez said last week in a radio interview with The Breakfast Club that he was cleaning house after the incidents and adhering to the judge’s orders by distancing himself from Jordan. “Everybody is gone — get out of my life,” he said. The rapper added that his only legitimate business partner was Elliot Grainge, the founder of 10k Projects, Hernandez’s record label. (The YouTube version of the interview has been viewed more than 4 million times.)

Representatives for 10k Projects did not immediately comment on the latest arrest and how it might affect the release of the new 6ix9ine album. According to Hernandez’s lawyer, Lazzaro, after Hernandez announced in the interview that he was getting rid of his management team, the FBI brought him in to warn him that agents had heard on wiretaps that some or all of the men, whom Lazzaro called “bad apples,” intended to “super violate” Hernandez in retaliation. He was offered round-the-clock surveillance but refused it, Lazzaro said.

Prosecutor Michael Longyear said that Hernandez was arrested Sunday after law enforcement officials learned that he planned to travel to Foxwoods Casino in Connecticut, where they feared he might be a catalyst for violence.

“The defendant is a violent man,” Longyear said.

But Hernandez seemed to foretell his fate in the interview last week.