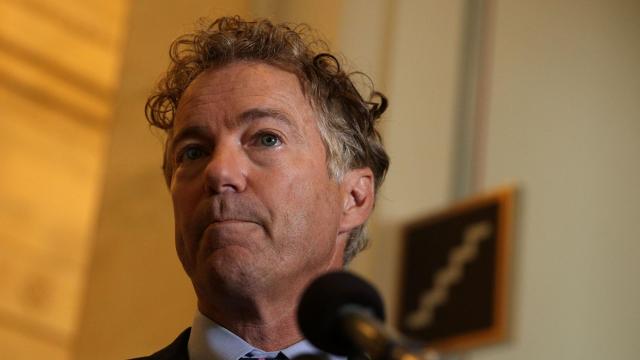 CNN — Chief Justice John Roberts on Thursday publicly refused to read a question from Sen. Rand Paul of Kentucky during the Senate impeachment trial that named the alleged Ukraine whistleblower.

"The presiding officer declines to read the question as submitted," Roberts said after receiving the question card.

Paul had expressed frustration with Republican leadership during the trial Wednesday night after it was made clear Roberts would not read his question that named the alleged Ukraine whistleblower, sources with knowledge of the situation said.

The development brought Roberts into an unusual position in the trial, where he has served in large part to guide the proceedings, not to decide or make any rulings on how they progress.

But prior to the 16-hour question-and-answer period for the trial on Wednesday, Roberts made clear that he would not read the alleged name of the whistleblower, nor would he consider questions that would move to clearly identify the individual, the sources said. Roberts, in his role, reads each question submitted by senators.

He was able to review questions from senators who submitted them prior to the start of Wednesday's proceedings, according to two sources. Paul's question, which sources said was revised several times but explicitly would have named the alleged whistleblower, ran afoul of the line Roberts drew on the matter.

Paul, for his part, could be seen and overheard expressing his frustration on the Senate floor during a break in the proceedings. "If I have to fight for recognition, I will," he was heard telling a Republican staffer.

The dispute created a behind-the-scenes issue that Republican leaders were attempting to resolve, though no solution had been reached by Wednesday evening.

Paul said during a break during Wednesday night's proceedings that "it's still an ongoing process" and the question "may happen tomorrow."

There have been several other whistleblower questions, some that even included identifying information, which Roberts has read. It's the alleged name itself that is his red line, sources said.

The disputed question -- an unprecedented situation -- comes on the first day senators have had a chance to be heard in the impeachment trial by submitting questions to be read aloud by Roberts directed at one or both of the legal teams. While several Republicans have called for the whistleblower's identity to be revealed in the past, Paul's attempted question on the Senate floor marks the most notable escalation to date.

The question falls in line with President Donald Trump's own repeated calls for news organizations to identify the whistleblower.

Days after the whistleblower complaint had been released publicly last September, Trump tweeted that he deserved to "meet my accuser."

"Like every American, I deserve to meet my accuser, especially when this accuser, the so-called 'Whistleblower,' represented a perfect conversation with a foreign leader in a totally inaccurate and fraudulent way," he said.

Roberts' refusal to read Paul's question also marks a rare moment of meaningful authority as he presides over the trial -- a position that is highly public but has largely seen him recite procedural rules, keep the clock and read aloud vote tallies.

The chief justice has long been known for his extensive preparation and an ability to foresee what's ahead, which some colleagues have likened to three-dimensional chess.