Rally by White Nationalists Was Over Almost Before It Began 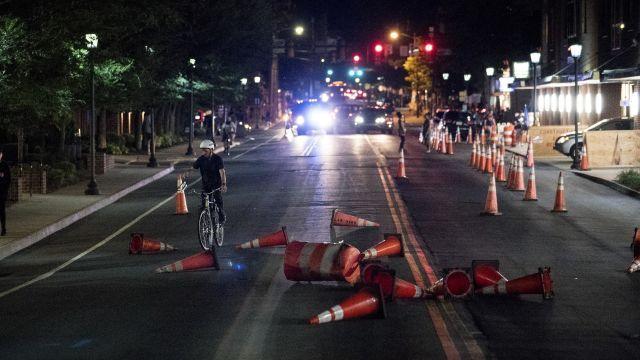 WASHINGTON — After weeks of hype, white supremacists managed to muster just a couple of dozen supporters Sunday in the nation’s capital for the anniversary of their deadly rally in Charlottesville, Virginia, finding themselves greatly outnumbered by counterprotesters, police officers and representatives of the news media.

But even with the low turnout, almost no one walked away with the sense that the nation’s divisions were any closer to healing.

Indeed, the streets of downtown Washington were charged Sunday with tension, emotion and noise, particularly in the afternoon, as right-wing agitator Jason Kessler and perhaps 20 fellow members of the far right — some wearing bright red “Make America Great Again” hats, some draped in American flags — marched under heavy police escort from the Metro station in the Foggy Bottom neighborhood to their barricaded and heavily protected rally area near the White House.

They were surrounded by a vast, rolling plume of counterprotesters, who hurled insults, waved middle fingers and chanted “Shame!”

“You killed a girl in Charlottesville!” one voice in the crowd yelled, referring to Heather Heyer, a woman who was fatally injured when a white supremacist rammed his car into a crowd of counterprotesters a year ago.

A similar dynamic to the one in Washington played out in Charlottesville on Sunday, where few if any far-right demonstrators could be found, and where the most palpable tensions developed between left-wing protesters and police, whose presence in the city was heavy and, some argued, heavy-handed.

“The problem is, the only opposition is the police,” said Pastor Robert Lewis of the Hinton Avenue United Methodist Church, as he and a group of religious representatives stood facing rows of officers in an effort to form what he called a buffer between them and the protesters.

Only a handful of arrests were reported in Charlottesville on Sunday, including a man and a woman who got into a fistfight after the man saluted the town’s statue of Robert E. Lee. By early evening, the security cordon around the downtown area had been lifted, hours ahead of schedule.

It was also a return to the way extreme-right demonstrations in America tended to play out before Charlottesville.

The template starts when a group like the Ku Klux Klan announces a rally. Next comes news coverage, fevered and intense. That prompts a huge number of activists, police officers and everyday people to turn out, dwarfing what is often a pathetically small band of extremists in hoods or armbands.

That does not mean that hate is on the wane. According to the Center for the Study of Hate and Extremism, there were a total of 1,038 hate crimes recorded in the 10 largest U.S. cities last year, an increase of 12 percent from 2016 and the highest figure in more than a decade.

In Washington on Sunday, the far-right rally felt as if it was over before it had really begun. It was officially scheduled to start at 5:30 p.m., but the small band of extremists arrived early, finished their demonstration and left before that time.

Their effort may have been diminished by the numerous news reports published about the right-wing protesters who were in Charlottesville last year, identifying them and sometimes leading to them losing their jobs.

Another factor was a thunderstorm that rolled over Washington around 5 p.m., dampening enthusiasm and thinning out the crowds. As the rain began falling in earnest, the white supremacists began leaving Lafayette Park in front of the White House.

Counterprotesters in the park booed them, chanting “na-na-na-na, hey hey, goodbye,” and their mood soon grew celebratory. Many Washingtonians felt a sense of relief that the event did not turn into something worse — and that the bad guys had effectively lost.

“I have no problem with them and their protest,” said Ianta Summers, a counterprotester carrying a large Black Lives Matter flag. “I have a problem with their ideals, and this just shows them, you can show up and speak, but you have to deal with the consequences.”

At the same time, some saw in the wall-to-wall media coverage a kind of public relations victory for the far right. “They are getting international coverage and profiles, and the bottom line is that exposure equals importance,” said Brian H. Levin, director of the Center for the Study of Hate and Extremism at California State University, San Bernardino.

Levin added that there had been “over-coverage” and “hype” in the run up to the protests. “And at a time when the movement is in disarray and some of its members are getting knocked off of social media, it can, nonetheless, get a message out across millions of eyeballs on television and in print,” he said.

In the run-up to the rally, Washington police had prepared meticulously to avoid violence. In the area around the White House, placards bearing the name of Police Chief Peter Newsham had appeared on light posts as if the nation’s capital were a dusty Wild West town: “All Firearms Prohibited Within 1,000 Feet of This Sign.” The rule was in effect from 6 a.m. to midnight.

The weapons ban, justified by a section of District of Columbia code, echoed a similar move by New Orleans police last year as they prepared for a showdown between left and right over a plan to remove Confederate statues there.

Just as importantly, Washington police kept the two factions strictly separated throughout the afternoon, using barricades, their bodies and motorcycles.

Most of the counterprotesters could not even catch sight of the brief right-wing rally, where some of the roughly two dozen demonstrators inside their penned-off area held signs that said, “Protect the Endangered Species, Stop White Genocide,” and “White Lives Matter.”

Kessler, speaking to the small group of marchers he was with in Lafayette Square, said that he did not want antifa counterprotesters “using violence to shut down the speech of people they disagree with.”

He tried to account for his group’s meager showing by acknowledging that some of his fellow white nationalists were fearful of the reception they would receive.

“There were a lot of people who were at last year’s rally who are very scared this year,” he said. “They felt like last year they came to express their point of view. They were attacked. And when they fought back, they were overly prosecuted.”

The antifa forces, numbering perhaps a few hundred, pooled around the Old Executive Office Building under a banner that declared, “It takes a bullet to bash a fash.” But with no object of their ire in sight, they seemed vaguely lost. A few tried to set a Confederate battle flag ablaze, but it would not catch fire, and they had to settle for pulling it apart and stomping it.

At one point, some in the crowd took a right turn, while others moved forward on 17th Street, but seemed unsure where to go next. For many of the counterprotesters, there was a kind of weariness that they had been compelled yet again to show up, as a kind of visual and numerical riposte to the forces of intolerance and hate.

“I can’t believe I have to protest Nazis in 2018,” read one sign early Sunday afternoon at a rally in Freedom Plaza.

Jessica Balaschak, 43, a graphic designer, was one of the hundreds in the crowd. She had come from New York City with a sign she recycled from a spontaneous protest at Trump Tower last year.

‘There aren’t ‘many sides,'” it declared, a response to Trump’s much-derided comment last year that seemed to lay the blame for the Charlottesville violence at the feet of both right-wing extremists and counterprotesters.

Balaschak said she hoped to help show the country that “we’re not OK with this at all,” meaning the white nationalists and the president who she believes has emboldened them.

“They’re so confident that the government supports their views that they’re marching around showing their faces in public,” she said. “This isn’t like arguing over the marginal tax rate. This is a very black-and-white situation.”

Among the speakers at a counterrally was Dr. Harriette Wimms, an activist and psychologist from Baltimore. She led a chant of “love wins” as a protester to her right held up a sign that read “Give Nazis a Platform” — and showed a bloody guillotine on a platform.

Wimms, 50, an African-American, spoke of the overt racism and discrimination that older members of her family had experienced in the past, and how, as a younger woman, she had argued with her parents that times had changed — that a new generation of Americans had renounced bigotry, and that they should no longer be “a little leery of white people.”

But recent events, she said, had complicated her view. Now, she felt that both she and her parents had been right.

Fascism persists in America, she said. But “we are still here, and we will stand strong in love.”