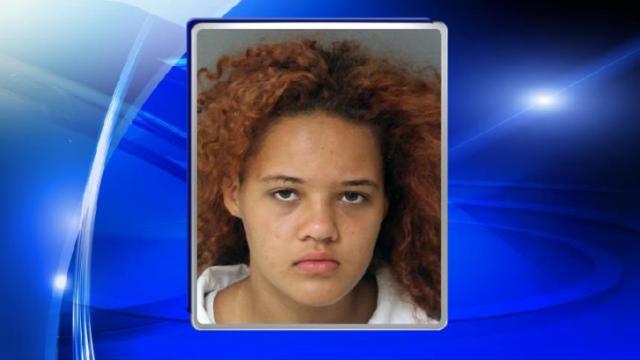 Raleigh, N.C. — A 17-year-old Sanderson High School student is facing a long list of charges after police say she fled from officers and nearly crashed into a home on Lynn Road after she was stopped for driving the wrong way on Interstate 540.

Alexis Kenya Lewis, of 5050 Flint Ridge Place, in Raleigh, was originally stopped by police after she was seen driving eastbound on the westbound shoulder of I-540 at about 7:20 a.m. Monday, according to authorities.

Lewis took off in a 2003 Lexus SUV and led police on a chase down Six Forks Road and Longstreet Drive before she lost control, hit a fire hydrant and crashed on Lynn Road, near Shellburne Drive, police said. Officers said Lewis hit two cars during the chase, but no one was hurt.

Neighnors who heard the crash said the loud noise startled them.

"That's what startled us at first because we were like, "What the heck was that noise,'" said Ronald Bree. We heard the thud too. Then we heard the sirens instantly after that."

Lewis has been arrested five times in Wake County this year. She was convicted in June of possessing stolen goods and was sentenced to probation.

"When you have a teen driver involved in these type of driving conditions and this type of behavior, it is kind of surprising," said Lt. Jeff Gordon with the North Carolina State Highway Patrol.

Witness are thankful no one was seriously injured.

"Our son was sleeping. Thank God he was on the other side of the house because otherwise it could have been bad," said Tracy Bree.

Lewis was taken to Rex Hospital with non-life-threatening injuries. She was charged with driving the wrong way on the highway, driving with license revoked, felony speeding to elude, failure to heed blue lights and sirens, speeding 65 mph in a 45-mph zone, resisting, obstructing and delaying law enforcement and assaulting a law enforcement officer.