Raleigh, N.C. — With the coronavirus pandemic and more turning to online shopping, Black Friday has changed for many shoppers and retailers.

Many Triangle shopping centers and parking lots were empty on Thanksgiving night, but early Friday morning, lines were spotted at stores like Best Buy, where shoppers were waiting for hot ticket items like the PlayStation 5. 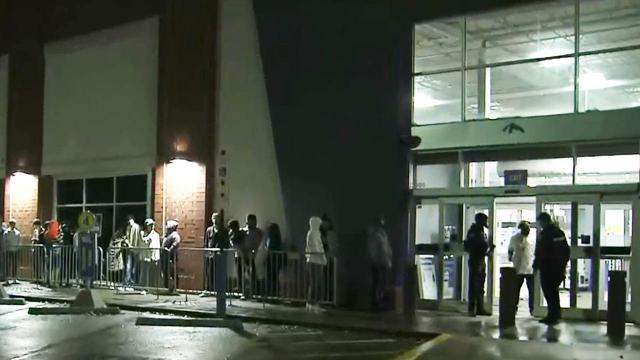 WRAL's Nia Harden talked to shoppers at the Best Buy at Crabtree Valley Mall who waited in the cold rain for several hours overnight to snag deals. Two groups waiting in line had traveled all the way to Raleigh from Jacksonville, N.C., and Ocracoke, and one couple had been waiting since midnight.

The Best Buy inside Cary's Crossroads Plaza also had lines out the door before the store opened at 5 a.m.

At 7 a.m., lines of people were waiting outside of Belk and other stores at Crabtree Valley Mall right before it opened.

Last year, COVID-19 concerns kept shoppers home, which dragged sales down. But this year, retail experts said more than 65 percent of people who shop in the next 48 hours will do so in person.

Experts said that could translate to record holiday shopping sales this year.

Still, many major retailers, including Walmart and Target, will keep their doors shut until bright and early on Friday morning as the behavior of Black Friday shoppers changes, largely due to online shopping. At least one company, Target, announced the change of not opening Thanksgiving night will be permanent.

A number of retailers pitched the later opening as a way of saying "thank you" to workers who've been dealing with customers throughout the pandemic.

Experts said they do expect a surge in shopping and that Americans have cash saved up because of the pandemic that they're ready to spend.

Shop at home, in store with apps for best Black Friday TV buys
SUGGEST A CORRECTION