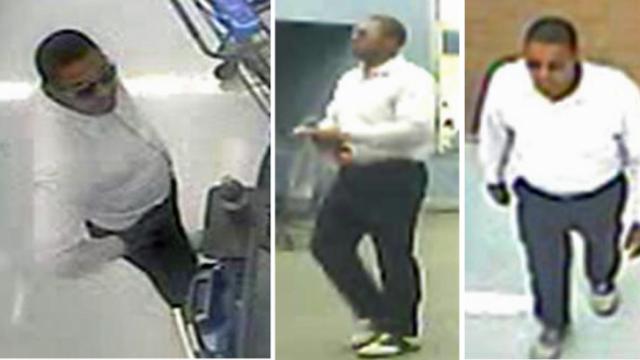 Raleigh, N.C. — Wake County and Raleigh authorities are asking the public for help in identifying a man seen in security photos as part of their investigation into a series of armed robberies in the area last month.

Jim Sughrue, a spokesman for the Raleigh Police Department, said Wednesday that no charges are pending against the man but that detectives want to speak with him because they believe he might have information that can help them in the crimes, all of which occurred between Sept. 22 and Sept. 27 in north Raleigh.

The man in the photos is black and wears sunglasses, a white shirt, dark pants and saddle shoes. Sughrue did not say where the photos were taken.

Anyone with information on who he might be is asked to contact Raleigh Crime Stoppers at 919-834-4357 or go online to www.raleighcrimestoppers.org.

Authorities are unable to say whether the crimes in northwest and north Raleigh are related but say circumstances of each are similar.

Several victims reported being approached by a man armed with a handgun while they were either getting out of or walking from their cars.

In all but one of the cases, the man either robbed them or forced them to drive to ATMs to withdraw cash, then let them out and abandoned their vehicles near or at their homes. (View the map below for locations and details of all the crimes.)

In one case, the robber also forced his way into the victim's home and held her and her husband at gunpoint. In another case, a man was assaulted.

Descriptions of the robber have also been similar.

In the latest crime on Sept. 27 – an attempted robbery – the victim reported that she was getting belongings from her car in a driveway on Wynneford Way when a skinny, light-skinned black man wearing a skull mask, cape and old pair of gray sneakers put his arm around her and told her in a deep raspy voice to stay calm.

Then, the woman said, he took her outside, pushed her to the ground and kicked her when she refused to give him her keys. She managed to get away and drove to a gas station on Falls of Neuse Road for help.

The cases have neighbors on edge.

"I've seen an increased police presence around at night, which is comforting, but until we hear that they got him, I guess we're all going to be on pins and needles," said Dena Rosenberg.