Most of the people who caused the destruction downtown during riots were white, according to Baldwin. Those people "used this as an excuse to incite violence to our downtown business community," she said.

Vandals, according to Baldwin, distract from peaceful protests for racial justice and a "cry of peace and unity."

On Saturday night, 12 arrests were made. Chief of Police Cassandra Deck-Brown said there will likely be more arrests as police investigate the vandalism that occurred.

Glass was broken in storefronts and buildings in downtown Raleigh and multiple walls were sprayed with graffiti.

The people who are causing the vandalism are "different each time," according to Deck-Brown. The 12 people who were arrested on Saturday all had local addresses – from Durham, Raleigh and Cary.

"Clearly some of the tagging last night was indicative that they were anarchists," Deck-Brown said. The symbolism that was spray-painted downtown showed that, she said. 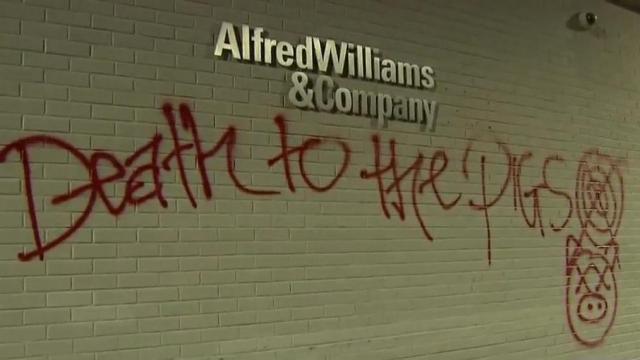 As of Sunday morning, the Raleigh Police Department had not charged anyone with vandalism.

"We are not going to allow people to vandalize and [destroy] our community," Baldwin said.

Before the vandalism started, a couple hundred people gathered at Nash Square downtown around 7:30 p.m.

Many of the people in the crowd were dressed in black and were protesting the decision that a Kentucky grand jury made to not charge Louisville police officers in the shooting death of Breonna Taylor.

After the march, violence and vandalism began to escalate. Around 9:30 p.m., Raleigh police posted on Twitter that arrests were being made because "protesters are now breaking windows and damaging property" and that the march was "now an unlawful assembly."

By 11 p.m., when a citywide curfew took effect, most of the crowd had dispersed.

City crews worked to clean up broken glass and scrub graffiti off buildings on Sunday morning.

"It's not nearly as bad as we expected," said one employee cleaning the streets.