Raleigh, N.C. — Video released by the City of Raleigh on Friday contradicts a woman's claim that police pointed their guns last year at her 6-year-old son and his elderly grandparents as they executed a search warrant at their home.

Raleigh police shared the footage on YouTube; it includes over several clips of police activity at the home of LaDonna Clark, who lives in the 3300 block of Friar Tuck Road.

WRAL News has reviewed all of the video footage and did not find any images of officers pointing weapons at either the child or the grandparents.

Donna-Maria Harris, a spokeswoman for Raleigh police, said the video only shows the child, Ayden Clark, coming out of the house, and officers did not point their weapons at the boy.

"Guns were not drawn on the 6-year-old,” she said, adding that police wanted to be transparent about their investigation after the mother's plea to the city council went viral.

One video clip appears to show an officer near the back of the house raising an object resembling a gun as suspect Michael Clark left the home.

"The image that appears in the frame is a rifle. It appears that the officer was adjusting the shoulder strap which caused the top of the rifle to come into view of the camera. At all times, the barrel of the weapon remains pointed at the ground as Mr. Clark exits the residence," Harris said.

There is a gun in the forefront of the frame when Ayden and his grandmother exit the house, but it pointed toward the ground for the duration of the clip.

"Any insinuation that the weapon came into view only when Mrs. Clark and the child exited the house is inaccurate," Harris said.

The incident prompted Clark, the boy's mother, to ask Raleigh City Council members about police accountability when she addressed them two weeks ago during the public comment section of their weekly meeting.

At a Friday afternoon press conference, Clark said that she believes Raleigh police released the clips of body camera footage in an effort to "manipulate the truth," and that additional footage related the incident has been withheld.

"I truly believe that there is footage that was not released today to the media," she said. "There are things that are concerning to me in regards to where is the footage of my son and my mother walking down the driveway? I want to get RPD to release that footage." 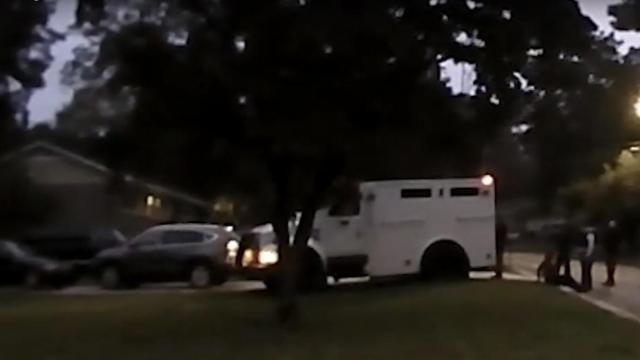 Harris said Friday afternoon that Raleigh police have released all existing video connected with the incident.

"There is one angle that shows Clark's mother and son walking out of the home. It happens at approximately 5:20 p.m., after Mr. [Brian] Clark exited the residence," Harris said.

Harris said there is no close-up footage of the Ayden and his grandmother exiting the home because officers were standing at "some distance" for safety reasons.

The video release was the result of a request from Chief Cassandra Deck-Brown, who asked that the footage be shown to the public in an effort for transparency, Harris said.

According to the search warrant that prompted officers' visit to Clark's home, officers were looking for stolen cellphones taken from an AT&T store that had been robbed.

According to court documents, one of the robbery suspects was identified as Brian Clark, who was believed to be a resident of the home.

During the execution of the search warrant, LaDonna Clark said officers forced her son, Ayden, who has autism and cerebral palsy, and her elderly parents out of their home and ordered them at gunpoint to sit on the ground while SWAT officers executed a search warrant.

In one of the clips, police order someone to sit on the curb outside the house. It was not clear in the video footage who that person was.

Clark said she filed a complaint with the department and requested video of the incident, but she was rebuffed by an internal affairs officer who refused to give her the complaint number associated with the case. She also said the IA officer assured her that the officers "did nothing wrong."

Harris said laws prevented her from commenting on whether or not an Internal Affairs investigation is still open.

Clark on Friday said that she saw the video footage released by Raleigh police when it began appearing in the local media. Prior to that, she said she was only shown about 10 seconds of footage during a meeting with the Internal Affairs officer.

Harris said that, in compliance with the law, which Clark was made aware of, she was only allowed to view portions of the video that contained images of her son during that December meeting.