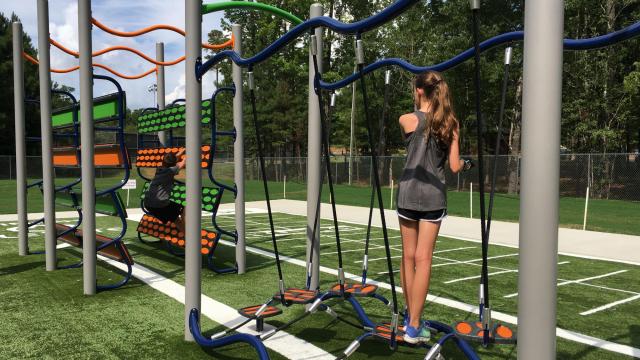 Raleigh, N.C. — A new kind of playground for teenagers and adults is headed to Raleigh.

Last week, the Carolina Panthers presented a $150,000 check to the Raleigh City Council to build a Panthers Play 60 Game Time Challenge Course at Barwell Road Park. The play space is intended to provide new kinds of health and fitness opportunities in southeast Raleigh.

The NFL Play 60 course, the first in the Triangle, is described, according to a press release, as "NFL Combine meets Ninja Warrior." It will include a timed 40-yard dash, a traverse wall, floating boards and other obstacles to challenge children’s agility.

It's part of a decade-old NFL initiative to encourage kids to get at least an hour of physical activity each day. These playgrounds, according to the release, are designed to appeal to kids who have aged out of traditional playground equipment, which is typically designed for kids 12 and under.

Construction on the project is expected to begin in the fall. It could be complete by spring 2021. The park is at 5857 Barwell Park Dr.

The Panthers unveiled a similar play space in Charlotte in 2015. You can take a look at it on the Panther's website. It's similar in many ways to the Elevate Fitness Course at Apex Community Park, which opened in 2017 and is pictured above. (Playgrounds in North Carolina are currently closed because of the pandemic.)