Raleigh, N.C. — Raleigh Mayor Mary-Ann Baldwin said the city is preparing for protests this weekend. The mayor has issued a citywide curfew from 11 p.m. Saturday night through 5 a.m. Sunday morning in preparation of protests in downtown Raleigh. Baldwin said in a statement that the decision to issue a curfew was "among the most difficult I have had to make as mayor."

The Raleigh Police will also not be in riot gear on Saturday night, according to Baldwin.

The Raleigh NC Police Protective Association tweeted about preparations for the protests, encouraging businesses to board up.

"We are preparing for our peaceful protesters. Please make sure you board up your business, protect your property along Fayetteville St. and surrounding areas. The peaceful protest is expected to hit around sunset. A curfew will be imposed," read the tweet.

"We are going to approach this as a peaceful protest," Baldwin said.

The last curfew that was put in place was set at 10 p.m. Baldwin said that she pushed the time back to 11 p.m. this Saturday to allow "ample time for a peaceful protest to occur."

She also said that the 11 p.m. curfew is a "compromise" that allows small businesses to stay open.

A number of streets in downtown Raleigh will be closed through the weekend – from 7 a.m. Saturday until 7 a.m. Monday – in expectation of possible protests.

The closures will keep vehicular traffic off of: 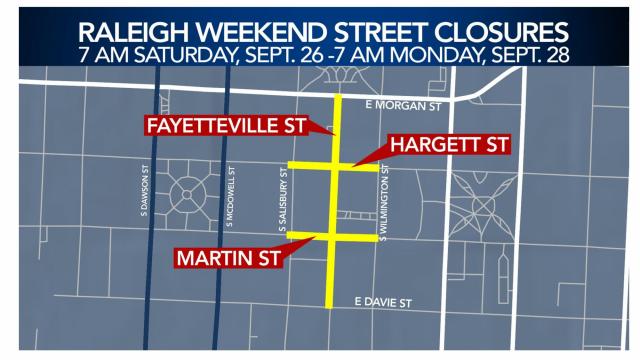 The road closures are a precaution after more than a dozen Durham businesses were damaged Thursday night by vandals. Those people, Durham Mayor Steve Schewel said, "came to town bent on destruction."

"There are those that want to use this opportunity to cause destruction and incite violence," Baldwin said on Saturday, echoing Schewel's statement.

"Destroying small businesses and vandalizing property is not the answer," she said.

There were people who came to Raleigh from other towns "intent on destruction" with backpacks full of bricks during May's riots.

She said that the real fear when issuing a curfew isn't the peaceful protesters, but people who latch onto protest groups and focus on destruction.

Baldwin said that the Raleigh Police Department will attempt to ensure compliance with the curfew not through arrest but through encouragement and conversation.

"If people are not obeying the curfew, we will start making arrests," Baldwin said. Fourteen peoplewere arrested for violating curfew on the weekend of August 29 and August 30.

A number of businesses downtown did not want to see a curfew, according to her.

Protesters have been rallying across the country, echoing the name Breonna Taylor. Taylor, a Black medical worker, was shot and killed by Louisville police officers during a drug raid.

Taylor's case — and her name — has become a rallying cry for protesters nationwide calling attention to entrenched racism and police reform.

The Kentucky Attorney General announced this week that officers involved would not be charged in her death. A grand jury indicted a former Louisville police officer on Wednesday for wanton endangerment for his actions during the raid.

On Friday, Breonna Taylor's family spoke to the media, calling for a release of body camera footage, police files and the transcripts of the grand jury hearings that led the grand jury to decide against charges for the police officers who killed the Black woman during a March drug raid at her apartment.

Protesters in Louisville vowed to stay in the streets until the officers involved are fired or someone is charged with Taylor’s killing. The city has a curfew in effect through the weekend.

After a weekend of riots in downtown Raleigh that followed the May death of George Floyd in police custody in Minnesota, Baldwin imposed a curfew for several nights, and protests since that time have remained largely peaceful.