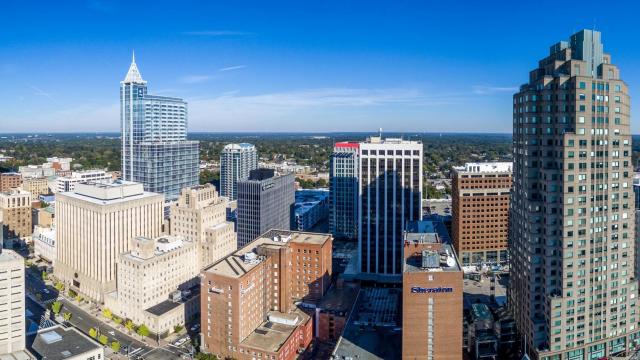 Raleigh, N.C. — Next week, 10 individuals and two organizations will be inducted into the Raleigh Hall of Fame.

The annual event, held this year on Sunday, Nov. 4 at the Raleigh Convention Center, features a cocktail hour, dinner and ceremony. The inductees include individuals (both living and deceased) and non-profit organizations who made significant and lasting contributions to the City of Raleigh.

Tickets are $75 and can be purchased online.

Otis Morton (Mort) Congleton: Mort Congleton worked in local government, public service and higher education for four decades. He served as the Executive Director of the Wake Tech Community College Foundation, helping to grow the foundation's assets from $2.5 million to more than $12.5 million.

He also served on Raleigh City Council and as Executive Director of the SPCA of Wake County. He worked to assist those in foster care, those with Cerebral Palsy and prompted the state legislature created the Ombudsman program for nursing homes across North Carolina to protect the interests of seniors.

Dr. William “Bill” Weston Hedrick: The Raleigh native graduated from Wake Forest College and Bowman Gray School of Medicine before serving as a captain in the U.S. Army Medical Corps. When he returned to Raleigh, he opened a medical practice and became known for making house-calls and treating patients regardless of their ability to pay, accepting vegetables and cakes as payment for medical care. He also operated the first emergency room at Wake Memorial Hospital (now WakeMed) and was the Chief Medical Examiner for Raleigh and Wake County.

Chief Justice Burley B. Mitchell, Jr.: Chief Justice Burley B. Mitchell wrote the court opinion for John Leandro v. State of North Carolina, a landmark case that established that every child has the right to a sound education in public schools. He served in the Navy and established a notable career in state government, leading various service organizations such as the North Carolina New Schools Project, an organization that develops and supports innovative high schools.

Thomas H. Sayre: Sayre is known locally for his large public sculptures throughout the Raleigh area at the N.C. Museum of Art, the Raleigh Convention Center and Marbles Kids Museum. Across the country, Sayre has completed over 50 projects and has been commissioned to do sculptures in Istanbul, Turkey, Phuket, Thailand, Hong Kong, and Calgary Canada. Sayre sat on the North Carolina Arts Council, served on the founding board of Raleigh’s Public Art & Design Board and received the North Carolina Award, which is the highest civilian award granted in the state.

WRAL's Gaddy, 12 others named to Raleigh Hall of Fame

Ronald Dean Shavlik: During his basketball career, Shavlik also became known for his business career and position as a community leader. At North Carolina State University, "Ronnie" was twice named All American and ACC Basketball Player of the year in 1956. He also started a business, Carolina Maintenance and Janitorial Supply, which he built into one of the top janitorial supply companies in the southeast. He served on boards and panels and gave to charitable groups often, empowered the physically and mentally challenged and started a local youth program that still helps young people set goals and develop a work ethic.

A.C. Snow: A.C. Snow grew up near Winston-Salem and was the youngest of 15 siblings. After graduating as valedictorian, Snow was drafted and served in Air Force during World War II. When he returned to the states, he received a degree in journalism and worked for the Raleigh Times and the News and Observer, where he became a revered columnist who still publishes in the Sunday edition. In 1993, he was inducted into the Journalism Hall of Fame at UNC.

11 inducted to Raleigh Hall of Fame

Millie Dunn Veasey: Born and raised in Raleigh, Veasey grew up during the Great Depression. She enlisted in the Women’s Army Auxiliary Corps serving in the 6888th Central Postal Directory Battalion, the only all-black, all-female battalion stationed overseas in World War II. She served as Executive Secretary for two presidents and was first woman to lead the Raleigh Chapter of the NAACP. She worked with Rev. Martin Luther King, Jr and Thurgood Marshall and was saluted by President Barack Obama at an event commemorating World War II veterans.

Robert “Bob” Webb Wynne III: As the president of Raleigh’s oldest business, the Brown-Wynne Funeral Home, this civic advocate served as a dedicated church layman, an education promoter and a state legislator. He served in the Army Counter Intelligence Corps, in the State House and in the State Senate, where he led the development of Fletcher Park, the initial funding for the North Carolina Zoo, the establishment of the NCSU School of Veterinary Medicine and the merger of the Wake County and Raleigh City School Systems. He also worked to promote understanding across racial and socioeconomic divides.

Haven House Services: Serving more than 1,300 youth and their families each year, Haven House was initially a group home for girls before the agency shifted to co-ed research driven community-based programs. Haven House Services has developed programs to specifically solve community problems and meet the needs of families in Raleigh and Wake County since the 1980s.

Rex Healthcare Guild: The Guild provides energy, ideas, and a personal touch to improve patient care and assists Rex Healthcare through volunteerism and financial support. Since the Guild formed in 1936, it has helped patients with their medical bills, served meals to needy families, donated money for expensive state-of-the-art medical equipment, and beautified the hospital and grounds.

Father Thomas Frederick Price: Price was the first North Carolinian ordained a Catholic priest. In 1896, he was appointed the Pastor of Sacred Heart Catholic Church on Hillsborough Street and worked to spread Catholicism and care for children in need. He published Truth magazine, which addressed the Catholic faith and reached over 20,000 people. In 1899, he started the Nazareth orphanage for boys, and at the height of the Depression cared for as many as 250 children.

Cantey McDowell Venable Sutton: In the late 1930s, established the Raleigh Little Theatre and the Raleigh Rose Garden and also starred in the theater’s first production of Macbeth. Later, the actress mentored aspiring young actors and a new generation of arts advocates.

Capitol Broadcasting Company is proud to be the title sponsor for this event.