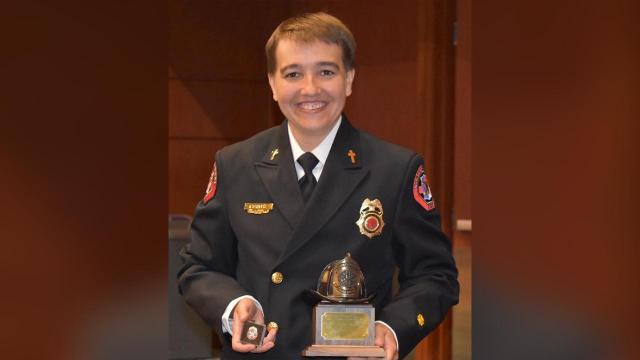 Raleigh, N.C. — Lauren Deer, a Raleigh-area firefighter, was recently honored as North Carolina's Firefighter of the Year for 2019, according to Firehouse, a news website for firefighters.

Deer lives in Raleigh and works for the Northern Wake Fire Department, according to Firehouse. She was recognized Saturday at the annual Firefighters’ Association and Association of Fire Chiefs awards banquet.

Firehouse reported that Deer was nominated by her fire chief, Tim Pope.

According to Pope, Deer scored in the top five percent of all her job duties, including training and responding to fires. She also serves as coordinator for the Junior Firefighter program and is quick to volunteer, according to Pope. As fire chaplain, she mentors and counsels firefighters and their families.

Firehouse noted that, when Captain Robert Nordman, a fellow emergency responder, died from cancer, Deer devoted her time to supporting mourning firefighters and their families. According to Firehouse, Deer spent many of Nordman's final moments by his side.

"She was the glue that held us together," Pope told Firehouse. “She has truly been a blessing to me personally, our department, our members and our community.”

During Saturday's ceremony at the Raleigh Convention Center, Deer spoke fondly of Nordman, according to Firehouse. "May we also find that renewed passion we have for the fire service regardless of how tired we may be or how rough life gets," she said. "May we take pride in all that we do as firefighters, serving our community and making a difference in the lives of others."