Raleigh, N.C. — The Raleigh City Council voted Tuesday to use $300,000 to help get people back downtown to shop and eat, with officials noting business in the central district is down 80 percent because of the coronavirus pandemic and recent riots over police use of force.

The Downtown Raleigh Alliance plans to use the funds for a marketing campaign and to add three people to its dozen current safety ambassadors.

"They can help you to your car if you want that. They can also be eyes on the street," Bill King, the alliance's president and chief executive, told council members. "If they do see an incident, they will call the police and wait at the site of an incident to make sure everything is OK."

The ambassadors will be stationed in places known to be trouble areas, officials said.

"A lot of people are on edge about a lot of things right now," said John Pugh, owner of House of Swank on East Hargett Street. "A good portion of downtown is boarded up." 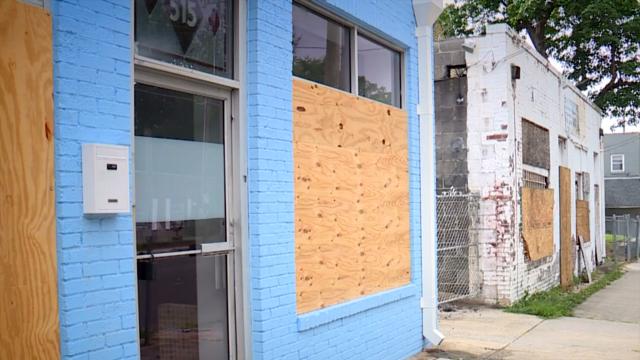 City officials said 178 buildings were damaged in the riots on May 30 and 31.

“We spent years building our downtown, so now we have to spend some time focusing on rebuilding it," Mayor Mary-Ann Baldwin said.

Councilman David Cox cast the lone vote against giving the Downtown Raleigh Alliance the extra money, saying he thought it would be better spent elsewhere, like in the city's small business loan fund.

"I don’t think it’s equitable," Cox said, noting many businesses outside of downtown have suffered during the pandemic.

Evelyn Briggs Davis, the owner of Briggs Hardware, on East Hargett Street, said she doesn’t even think the money will help her situation, saying she fears she won’t be able to renew her lease. Other downtown business owners agreed.

"I think there’s some more structural issues that need to be dealt with before you get into all of the marketing," Pugh said. "Frankly, keeping businesses open [is a top priority]. I know we’re going to be OK. We are surfing the waves like everyone else, but I know a half-dozen businesses that, one worse month, they are going to be out of business.

Baldwin commended the Downtown Raleigh Alliance for supporting local businesses during the pandemic, and she asked City Manager Ruffin Hall to look for more money in the budget to help work on other problems, such as homelessness and community policing.

In other business, the council followed Wake County's lead in declaring June 19 – Juneteenth, the day the last slaves were freed after the Civil War – as a city holiday. The Wake County Board of Commissioners took the step on Monday.