The curfew is in place between 8 p.m. and 5 a.m. and will be in effect nightly until Baldwin declares it is over, according to a press release. The curfew does not apply to medical professionals, public safety workers, hospital workers, military personnel, public transportation personnel, public utilities personnel and journalists.

People will also be allowed to travel if they have a medical emergency.

Businesses, including grocery stores, restaurants and retail must close by 8 p.m. Employees leaving work after that time – including those returning home to Raleigh from workplaces in other cities – may be stopped and asked to verify that they are allowed to be out, a city spokeswoman said.

Raleigh residents can call the city curfew hotline at 919-996-2200 with specific questions.

Violators who travel inside city limits during the curfew will be charged with a misdemeanor and will face up to 60 days in jail and a $1,000 fine.

Corey Branch, Raleigh's mayor pro tem and the only African American on the city council, said he fully backs the protest message but not the violence.

"We need to make sure that we are not destroying the very things we're trying to stand up for," he said.

"We're just hurt and devastated by what's happened to downtown," said the third-generation owner of Reliable Jewelry and Loan. His family was looted on Saturday and again Sunday.

"I think something should have been done earlier, more enforcement, the National Guard."

He also questioned why law enforcement wasn't more proactive to protect businesses that were repeatedly targeted by rioters.

"Where were you when we were getting broken into?" he asked.

In a statement announcing the curfew, Raleigh Mayor Mary-Ann Baldwin wrote, "My hope is that this will allow our community to pause, collect ourselves, begin to repair the damage, and turn our focus to the more important work of finding connection and commonality. We need to come together peacefully and as one community."

A curfew remains in effect nightly in Fayetteville from 8 p.m. to 6 a.m. The City of Fayetteville was the first to put a curfew into effect on Sunday, and the city that saw fires and looting Saturday had a relatively calm Sunday night. Exceptions are allowed for law enforcement, firefighters and other public employees, medical and military personnel and employees of public utilities, public transportation and the media.

The cities of Wilson and Clinton also imposed curfews from effective at 8 p.m. Monday.

The curfew in Wilson begins at 8 p.m. and is in effect for everyone other than those seeking medical assistance for themselves or a family member or people traveling to or from work.

The curfew in Clinton allows exceptions for "many businesses as well as persons traveling to and from those businesses to procure services and goods."

The events protesting the death of George Floyd began peacefully on Saturday and Sunday but led to riots, which included damage to property and threats against police. Seven people were arrested at North Hills and near Triangle Town Center before sunrise on Monday after retail stores were broken into.

Glass windows were knocked out at Harris Teeter and REI along with smaller North Hills businesses, including the Ideal Image medical spa.

Looters even started a small fire in a line of bushes. 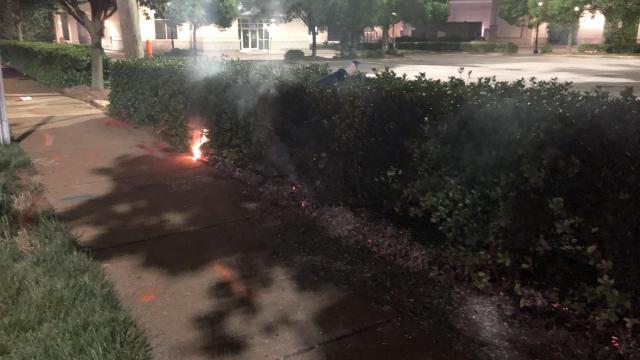 At 4:30 a.m., National Guard vehicles were parked outside North Hills, blocking the entrance to the shopping center. On Sunday, Gov. Roy Cooper requested more than 450 National Guard members to deploy across North Carolina. 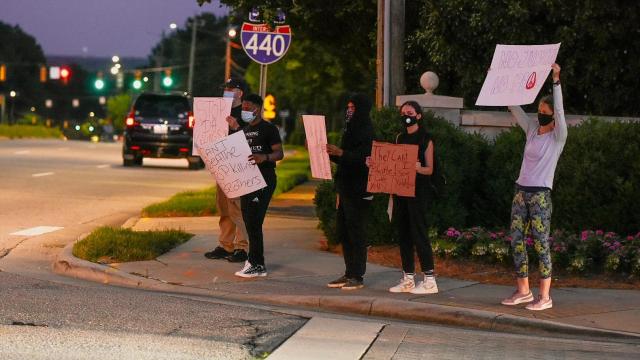 "...My hope is that this will allow our community to pause, collect ourselves, begin to repair the damage, and turn our focus to the important work of finding connection and commonality," Baldwin wrote Monday. "We need to come together peacefully and as one community."

Baldwin said, while peaceful protestors are usually welcome on Raleigh's streets, the weekend riots were damaging to citizens and the businesses already suffering economic losses due to the pandemic.

"There is truth in the call for justice," she said. "For those who have protested peacefully, your voices are being heard and will always be welcome. The call for change can’t be answered, however, if we continue to allow destruction of our property and attacks on our small businesses that have already been hurt by this as well as the impacts of COVID-19."