Cleanup from largest Raleigh fire in decades to last into weekend

Raleigh, N.C. — The biggest fire in downtown Raleigh since the 1920s was extinguished early Friday morning, but the flames destroyed an apartment building that was under construction and damaged nine nearby buildings, five severely.

The unfinished, five-story Metropolitan building on nearly 2 acres at West Jones and North Harrington streets, near the Glenwood South restaurant and bar district, ignited around 10 p.m. Five alarms for help to battle the blaze were sounded over the next two hours.

"The building is half built. It's all stick," a man who called 911 to report the fire told a dispatcher.

"This is going to be up, and it's going to be huge," the 911 caller said, adding that flames were already 20 feet in the air.

The 274,000-square-foot building was made primarily of wood, Raleigh Fire Chief John McGrath said during a Friday morning news conference. The building had been inspected 50 times, including most recently on Monday, he said, and it was up to code and had passed each inspection.

McGrath dismissed the idea that the building's wooden structure was dangerous.

"Any building that's being built is vulnerable at some point," he said. "Unfortunately, this building was at the stage when it was extremely vulnerable, before sprinkler systems got in, (before) fire-resistant walls were put up."

"It's layered, and it's burning underneath," McGrath said Friday afternoon of the pile of burned wood left by the fire. "We have to make sure all of the fire is out before we can declare the area is safe."

Investigators have not yet been able to get to the building to determine the cause of the fire, and there was no estimate on the cost of the damage.

Raleigh police were on site much of the day, trying to determine if the fire had been set, and teams from the federal Bureau of Alcohol, Tobacco, Firearms and Explosives and the State Bureau of Investigation joined in the effort.

"We thank the heroic firefighters and all first responders who risked their lives to contain this fire and that no loss of life occurred. While the cause of the fire has not yet been determined, we are working closely with authorities to conduct a thorough investigation and review of the incident," building owner Banner Real Estate Group and general contractor Clancy & Theys Construction said in a statement. "To our neighbors and to the surrounding community, we are saddened by this unfortunate situation and ask for your patience as the investigation continues and as we begin the process of site clean-up."

Raleigh historians said the five-alarm fire was the largest in the city in 90 years based on the size of the response, according to McGrath. Officials said 130 firefighters from the city and around Wake County battled the fire through the night.

One firefighter was injured by falling glass, according to officials, but the injury was not considered life-threatening.

"I want to thank Raleigh’s first responders for their heroic efforts in protecting the public during last night’s destructive fire. I am grateful that no serious injuries have been reported, as this could have been a significantly more tragic event," Mayor Nancy McFarlane said in a statement. "We were reminded of the dedication and skill of our first responders as witnessed when Raleigh firefighters worked tirelessly through the night to first contain and then extinguish the blaze. Raleigh police supported evacuation efforts and maintained a safe perimeter, and county partners supported the emergency response.

"I would also like to thank the community organizations and businesses that have opened their doors and offered food, shelter and support to first responders and all of our residents displaced by the fire," McFarlane said. "Please join me in keeping the first responders and impacted residents in your thoughts and prayers as our community recovers from this devastating fire."

Several downtown Raleigh streets remain closed, and hundreds of customers were without power.

Duke Energy crews had restored power to as many customers as possible, but fire crews have kept them away from some heavily damaged areas, spokesman Jeff Brooks said. A construction crane that collapsed during the fire also took out some power lines in the area. A repair crew remains on standby to restore power to other areas as quickly as possible, he said.

Charter Communications crews haven't been able to get into the area to assess damage to the fiber-optic lines that carry the company's cable, internet and phone signals, spokesman Scott Pryzwansky said. So, it was difficult to estimate how customers were affected and how long repairs would take, he said.

About 10 nearby buildings were damaged by the fire, including six floors of the neighboring 204-unit Link apartments and 17 floors of the Quorum Center condominium and office high-rise, according to fire officials.

Developer Ted Reynolds, who built the Quorum Center more than a decade ago and lives on the 15th floor, said he noticed his curtains were glowing when he turned out the lights late Thursday, and when he stepped out on his balcony to see what was happening, he saw flames shooting into the sky over his head.

"I didn't know what to think," Reynolds said, "but I didn't want to stop to talk about it. I wanted to get out of the building.

"Thank heavens we managed to get on the elevator before it cut off because she [wife, Peggy] couldn't have come down the steps," he said.

He said Clancy & Theys President Tim Clancy "was clearly disturbed by the whole thing" when he called Reynolds Friday morning to check up on him.

Nationwide Insurance has already set aside $5 million to $7 million to cover damage claims on the Quorum Center, Reynolds said.

McGrath said Friday afternoon that his department was assessing the structural integrity of the buildings so that they could allow residents back inside over the weekend to retrieve some belongings. Because the fire alarm and sprinkler systems have been damaged, however, the buildings are uninhabitable for the foreseeable future, he said.

Construction on the Metropolitan began in 2016 and was scheduled to be finished by the end of this year. Plans called for 241 apartments, including studio, one- and two-bedroom units.

"I saw a huge explosion from a car up there, a lot of sparks falling down," said Ian Martin, who saw the fire as it was burning. "I even saw some ashes on the roads, like it's been raining ash."

"I've just been looking at it," said Jeff Woodward, another bystander downtown who saw the fire. "It's incredible the amount of buildings that are burning over there. There's cars exploding up in the parking deck that are burning. I've never seen anything like this before." 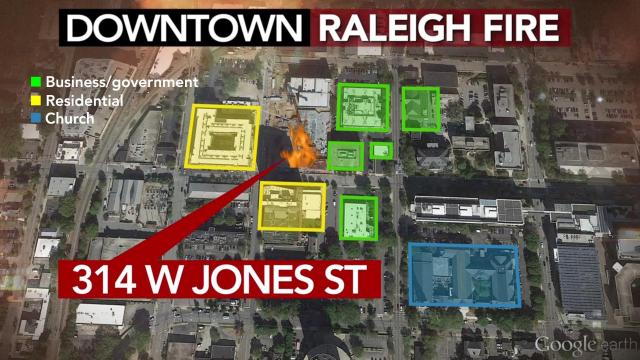 The sight of the flames lapping at the night sky brought people to downtown. For Raleigh residents, the scene of familiar buildings burning was almost surreal.

"You see these places every single day," said Tim Mertes, who was also downtown. "To see them on fire is definitely something else."

Kirk Eilers lives in The Link, an apartment building near the Metropolitan, an apartment also under construction and covered in flames.

"There was a fireman beating at the door," Eilers said. "He told me you need to evacuate the building immediately."

"The only thing I saw was an orange sheet of flames."

Eilers left with his cell phone, wallet and the clothes he was wearing. He said he worries about smoke or water damage and whether he has a place to live.

"There's kind of that deep-seeded anxiety and worry about what you do next."

Eilers, along with the others affected, will be able to check out the damage of his apartment for the first time Saturday morning. Residents will be allowed into the building in shifts.