A 10-year-old from Raleigh has raised hundreds of dollars for breast cancer research through the "October Saves" goalie challenge.

Through October Saves, hockey fans can make a pledge to their favorite goalie, and each "poke check" or "glove save" adds money to the cause. It doesn’t matter whether save is done by a pro goalie or amateur or in a game or a practice. Even virtual saves count.

Vaughn Lawson is playing in honor of his grandmother, or "Ya-Ya," who was diagnosed with stage 3 triple-negative breast cancer in 2018. 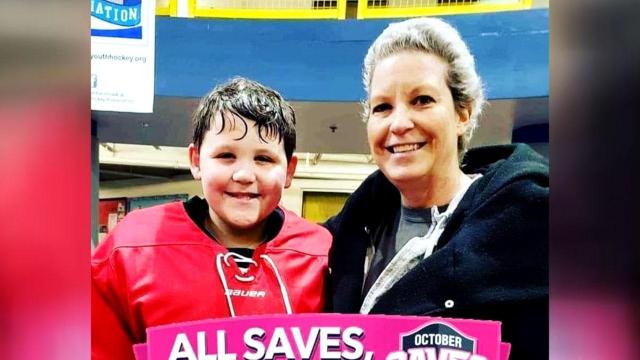 Last year, Lawson raised over $600 for the cause.

Beth Vaughn, or "Ya-Ya," is Lawson’s inspiration. She endured many rounds of chemotherapy and a mastectomy. By December 2018, imaging revealed that the cancer had spread to four of her lymph nodes as well as six spots on her liver.

When her cancer developed into stage 4, it was hard news for the whole family.

"I learned that it will stick with her forever, so I had to just tough it up," Lawson said.

The junior hockey player said he will keep fighting for his Ya-Ya and others with the same disease.