Raise a Glass to His Library 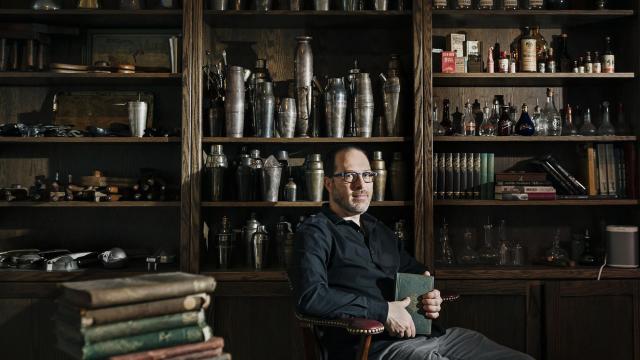 NEW YORK — Twenty years ago, Greg Boehm was drawn to a small, ornate book, “Drinks: How to Mix and How to Serve,” while visiting an antiquarian bookstore in London. “It had a stamped burgundy leather cover with gold-foil printing,” Boehm said. “It was a really beautiful little book.” He bought it for about $75 and it became the first in his collection of more than 3,000 vintage cocktail books. Now it’s worth about $750, he said.

Today, Boehm, 49, is often found on the fifth floor of a nondescript building in the Flatiron district, inside the new offices of Cocktail Kingdom, his company that manufactures and imports barware and reprints vintage cocktail books. He is also the co-owner of several bars, including Existing Conditions, Boilermaker, Katana Kitten, Mace, and the global Christmas-themed pop-up bar, Miracle.

Boehm’s cocktail book library, which is kept at the office, features first editions, cocktail recipe pamphlets and decades-old menus. Until recently, only those in the know could make an appointment to dig through Boehm’s ramshackle system.

But when Cocktail Kingdom relocated to a larger space last spring, Boehm decided to organize his collection for the public. Visitors can now easily access what he believes is a first edition of Jerry Thomas’ “How to Mix Drinks” and the 1927 edition of “Barflies and Cocktails.” There are also books in Japanese, Spanish, German and French. Appointments are still necessary, however, to visit (email library@cocktailkingdom.com for more information).

The following interview is an edited and condensed version of a conversation with Boehm.

Q. How did you get drawn into this world?

A. About 20 years ago my family’s publishing company, Sterling Publishing, where I worked at the time, published “Classic Cocktails,” by a guy named Salvatore Calabrese, who is a celebrated bartender in London. It turned into quite an amazing seller. So when I was in London I started visiting him — at the time he was at the Library Bar at the Lanesborough Hotel. I really enjoyed his classic cocktails, and I didn’t know of any cocktail bars in New York. Angel’s Share existed but I didn’t know about it. And so, being a book person and also now a person interested in cocktails, I started looking at antique cocktail books as my personal hobby.

Q. What was the first truly rare cocktail book that you found?

A. I found an 1862 copy for $275 of Jerry Thomas’ book “How to Mix Drinks”at Argosy Book Store in midtown Manhattan. Now worth $2,000, it’s widely considered to be the first cocktail book ever written, although cocktails were mentioned in some books before then. It was in very bad condition. I think we have, like, 16 versions of it in the library now.

Q. Let’s say someone comes in wanting to know more about, say, the martini. What books would you recommend?

A. Martin Doudoroff is our librarian and cocktail historian, and we have databases and things that are useful, but mostly I just have a sense of where something could be. So we would start pulling the dry martini — because martinis originally started with sweet vermouth and then at some point became more of a drier drink. So you start pulling books. The first one to mention a dry martini is in French and it’s called “American Bar”from 1904, by Frank Newman. Then there’s a book from 1906, which is the first English-language book to mention a dry martini, called “Louis’ Mixed Drinks.” It’s a beautiful Victorian-style book.

Q. What’s the oldest book you have?

A. The oldest is from 1676. It’s a treatise on cider, so, it’s not directly about cocktails. And then in 1858 is the first book that actually mentions cocktails by name, “Fermented Liquors.”

Q. How do you think New York’s cocktail scene has evolved over the past 20 years?

A. In New York, as I mentioned, Angel’s Share existed, along with a few other places. After that, you started seeing more places making classic cocktails. I was definitely happy when PDT, Death & Co. and Pegu Club brought in a whole wave of very educated bartenders making interesting drinks and the classics. Then it further progressed to a point where there were innovative drinks in both small and large bars. Now in New York, things make me a little bit nervous because it seems that all bars and restaurants feel obligated to have a cocktail menu, whether or not there is somebody there with a passion behind it. So, it’s a tricky place right now. Q. When you first started collecting your books and barware, did you imagine that cocktail culture would be where it is today?

A. No. I didn’t really see it taking off the way it did. Cocktail Kingdom only started importing barware from Japan later on because I knew bartenders wanted better tools. I never had one moment where I thought, “This is going to be extremely popular.” When cocktail bars started opening in secondary and tertiary cities, I was like, OK, cocktail bars are going to be a thing.

Q. Who do you think are the great cocktail writers today?

A. David Wondrich, the author of “Imbibe!”He also writes for the Daily Beast. He is absolutely my No. 1 favorite cocktail writer. Anything he writes, I read. If I disagree with him, then I think I probably have it wrong and he probably has it right. Jeffrey Morgenthaler has written a great book for people that are getting into cocktails, whether professionally or for home use. And then Philip Greene has a written a recent book, “To Have and Have Another,”about Hemingway and cocktails.

Q. Who are your favorite bartenders in New York? Favorite bars?

A. I have a habit of starting to work with some of my favorite bartenders. So, Nico de Soto — he and I now own Mace together. He had an experimental club in London and then New York, and he was my favorite bartender. Also Masa Urushido and I are partners at Katana Kitten. He was one of my absolute favorite bartenders when he was at Saxon + Parole. Matthew Hunter at Eleven Madison Park. But I think my favorite bartender is not part of a fancy bar, not a place that makes cocktails at all, in fact. It’s in Port Jervis, New York, and it’s called the Venture Inn. And the bartender there, Ginger, I think, reads a room better than anybody I’ve ever seen in my life. She knows exactly when to fill up your glass. Q. Seven of the quirkiest cocktail recipes you’ve come across. Go!

A. There’s the Frankenstein Cocktail, from “Pioneers of Mixing Liquors and Cordials at Elite Bars,” where red kirsch, French vermouth, maraschino and orange bitters float between green chartreuse on the top and bottom of the glass; Ernest Hemingway’s Death in the Afternoon from “So Red the Nose”combines absinthe and Champagne (the directions from the book say to “drink 3 to 5 of these slowly”); the Tin Roof from “The World’s Drinks and How to Mix Them”isdescribed asanything that’s “on the house”; the Baby Burns from "Mixed Drinks and How to Make Them,” now known as the Bobby Burns, combines sweet vermouth, Benedictine and scotch; the Wedding Punch from “The Mixicologist” includes pineapple juice, lemon juice and syrup, port, brandy, vanilla bean and ambergris (a waxy, flammable material produced in the digestive system of sperm whales); the Monkey Gland from “Barflies and Cocktails” mixesabsinthe, grenadine, orange juice and gin; the Life-Prolonger, from “The Flowing Bowl: What and When to Drink,” includes a whole egg, sugar, sherry, port, crème de roses, and cream, all mixed together with ice and strained into a large glass.