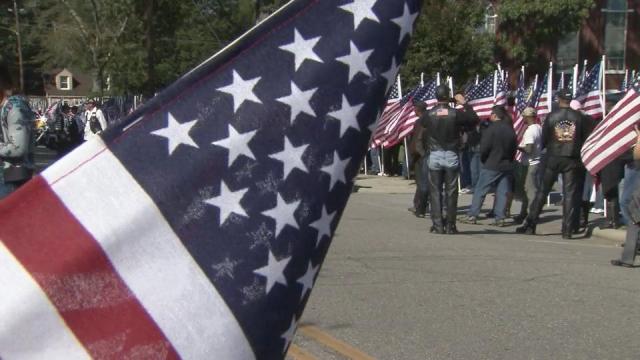 Raeford, N.C. — Two weeks after she was killed in the line of duty, Sergeant Donna Johnson of the North Carolina National Guard was laid to rest in her hometown of Raeford Saturday.

Hers was the third North Carolina funeral to stem from a single attack Oct. 1 in Khost, Afghanistan. Johnson and  two other members of the Winterville-based 514th Military Police Company died when a Taliban suicide bomber rammed a motorcycle packed with explosives into a joint U.S.-Afghan patrol.

Johnson, 29, joined the National Guard in 2006. On Saturday, her family, friends, neighbors and dozens of members of the Patriot Guard, an organization of motorcyclists who attend funerals to honor fallen U.S. military personnel, lined the streets of Raeford in her honor.

"The sense of pride for our fellow Americans and Sgt. Johnson is overwhelming," said Sabrina Valentine, a member of the Patriot Guard.

Valentine and many others who didn't know Sgt. Johnson were on hand Saturday because they felt a sense of duty to attend her funeral, she said.

Sgt Johnson was a highly decorated soldier. She was a military police officer and had worked in bomb training at Fort Bragg and served in Iraq and Afghanistan.

Her family said in a statement they want to remember Johnson "as a mission focused professional who gave her life serving her country and performing a job that she loved and excelled at."

She "was a reserved and private person who had a close group of friends" and four dogs. She is survived by her spouse, Tracy Dice.