The tweet encouraged students to wear white in support of white supremacy and had the hashtag "Trump 2016." 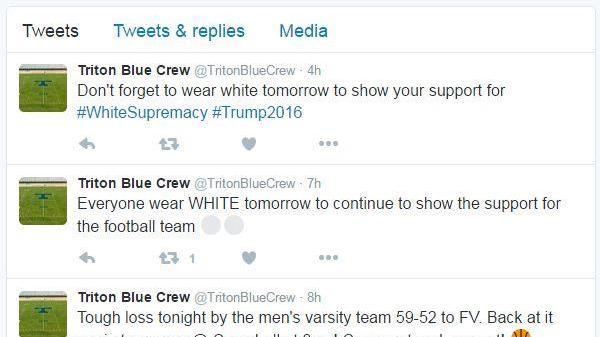 The school system has an investigation underway, and at this point it's unclear whether the tweet, which was removed around 5:45 a.m. this morning, came from a student.

Patricia Harmon-Lewis, a spokeswoman for Harnett County Schools, said the racist message was posted after a tweet from Triton Blue Crew reminding students to wear white Wednesday in support of the school's football team. The team's colors are blue, white and black, and for each of three days, students were encouraged to dress in one of those colors.

Principal Chip Mangum said the Triton Blue Crew Twitter account started a few years ago and was not run by the school. He said school officials are "trying to get to the bottom" of what happened, saying the tweet may have been sent from someone who is  not a student.

Several students called the tweet disturbing and said they do not feel it is a reflection of Triton High School.

"When it comes to Triton, it isn't going to do anything controversial. We try to work our hardest, and we accept pretty much everybody in our school," student Audrey McLeod said.

In an emailed statement, Harmon-Lewis wrote that the Triton Blue Crew account was created by students and has no official ties to the school or the school system.

"I would really hope that it wasn't someone from our student body that wrote it, but it might have been someone trying to joke," student Skyler Shaw said. "But it definitely isn't something that should be taken as a joke."