Cary, N.C. — A Cary man said he’s become a target of vandalism because of his political beliefs.

First, his campaign signs were stolen. Then, a vandal spray-painted the words "Racist" and "**** Trump" on his car.

He said he puts out campaign signs in his yard every election season – but being subjected to vandalism is a first.

"Tuesday morning we had somebody knock on our door at 8 a.m. I was getting ready to go to work," he said.

When he stepped outside, he saw the ugly words spray-painted across both sides of his car and his garage in bright orange letters.

The Cary man, who wants to remain anonymous, shared his photos with WRAL.

The neighbor said he’s become a target because he's a supporter of President Trump.

"Unbelievable. I cannot believe," he said. "I know we’re going through some unprecedented times in political history, but I couldn’t believe somebody would feel so inclined to come in my yard and vandalize my property because of my viewpoint."

Surveillance video captured what appears to be a man wearing a hat and face covering walking into his yard at about 3:30 in the morning this past Tuesday.

The video shows the man spray painting the victim’s vehicle and walking away. 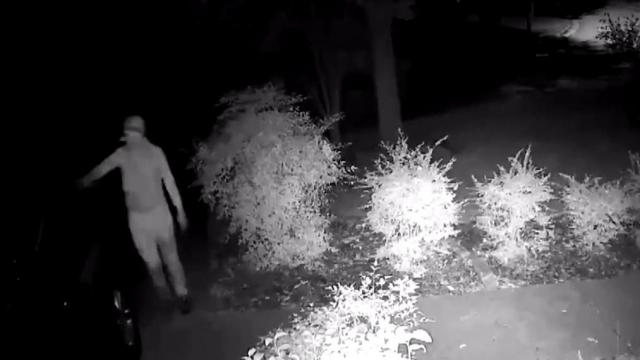 The homeowner said he's filed a report with the Cary Police Department. WRAL reached out to investigators and is waiting to hear if they have a suspect.