Candidate Apologizes for a Remark on ‘Hanging’ 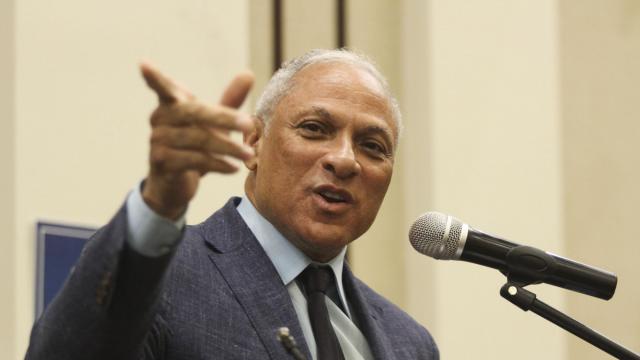 JACKSON, Miss. — Sen. Cindy Hyde-Smith of Mississippi used a debate Tuesday to express regret for making a cavalier reference to “a public hanging,” in an attempt to steady her campaign just over a week after she imperiled her prospects against former congressman Mike Espy in a state scarred by racial violence.

Insisting that her comments, which were captured on video and immediately ricocheted across the internet, reflected “no ill will,” Hyde-Smith, a Republican, said, “For anyone that was offended by my comments, I certainly apologize.”

But in what will be the only joint appearance before their Senate runoff election next Tuesday, she immediately accused Espy, a Democrat, of weaponizing her misstep, complaining that her words were being twisted.

The first African-American in Mississippi elected to Congress since Reconstruction, Espy said Hyde-Smith’s remark had “given our state another black eye.”

And he tried to harness the mix of anger and embarrassment some voters in Mississippi have felt in the days since a liberal blogger released footage of the senator praising a supporter by stating that if he invited her “to a public hanging, I’d be on the front row.”

But the former lawmaker, who had been out of public life for 25 years until he entered this race, did not fully revisit the issue, which has upended a contest in which Hyde-Smith had been the heavy favorite, until his closing statement.

Addressing reporters after the televised forum, Espy said he “tried not to be too hard” on Hyde-Smith over her gaffe because “the world knows that those comments were harmful and hurtful.” And he accused Hyde-Smith of reading her apology, and much else, verbatim from notes she jotted down.

In a sign that Republicans are nervous about her exacerbating her difficulties, Hyde-Smith would not speak to reporters after the forum, instead dispatching Sen. Roger Wicker, R-Miss., her colleague, to take questions.

Neither candidate was particularly agile, nor were they pressed particularly hard by the moderators or each other, but Hyde-Smith used much of the hourlong debate to recite a series of attack lines against Espy.

She argued that “conservative values are on the ballot,” while also embracing President Donald Trump as often as she could. She used her opening and closing statements to promote Trump’s planned rallies for her Monday, even offering the website URL where people could register to attend.

She repeatedly assailed Espy on immigration, linked him to Sen. Chuck Schumer of New York, the Democratic leader, and invoked the $750,000 her rival made representing the one-time dictator of Ivory Coast.

“You know, if I got paid $750,000 for one 12-week job, Macedonia Baptist Church in Brookhaven, Mississippi, they would love that tithe,” she said, a line that was delivered more effectively than a later reference to “an Ivory Coast.”

Espy said he resigned his contract and contacted the CIA when he found out the leader, Laurent Gbagbo, “was a really bad guy.”

A former agriculture secretary under Bill Clinton who hails from the moderate wing of the Democratic Party, Espy invoked a handful of Republicans and vowed he would put “Mississippi First” — while suggesting Hyde-Smith would bow to Trump.

He sought to straddle on some issues, such as gun control, but he criticized the president’s tariffs because of the retaliatory measures on Mississippi’s farmers. And he was open about his opposition to Trump’s proposed border wall, calling it pricey and “impractical.”

Like many Democrats this year, he sought to go on the offensive by arguing that Hyde-Smith did not want to ensure that individuals with pre-existing conditions could purchase health insurance.

She sought to cling to her talking points on the issue but confused the matter by insisting she would compel insurance companies to cover those with pre-existing conditions while also trumpeting her support for a “free market” approach on health care and repeatedly denouncing the Affordable Care Act.

It was not until the closing moments of the debate that Espy flashed emotion about Hyde-Smith’s gaffes, alluding also to another video in which she joked about ensuring that some people don’t vote.

“We’ve got a senator here talking about public hangings and voter suppression,” he said, adding: “Ladies and gentleman, I’m not going back to yesteryear. We are going to move forward.”

Hyde-Smith and Espy met a week before the runoff that will be the final election of the 2018 midterm season. And even before they took the stage at the Farm Bureau’s headquarters in this state capital, the stakes of the race, and of the debate, were made clear well beyond Mississippi’s borders.

Trump used an impromptu question-and-answer session with reporters at the White House to defend her and minimized her comments.

“It was just sort of said in jest,” Trump said. “She’s a tremendous woman, and it’s a shame that she has to go through this.”

But the fallout from Hyde-Smith’s misstep has shown no signs of abating: On Tuesday, Walmart, the country’s largest retailer, asked that she return the $2,000 contribution its political action committee had made toward her campaign, a request Espy invoked at the debate.

“Sen. Hyde-Smith’s recent comments clearly do not reflect the values of our company and associates,” a spokesman for Walmart said in a statement. Walmart was the third company to withdraw its support of the senator.

While the results next week won’t affect the balance of power in the Senate, if Espy were to pull off the upset, it would limit Senate Republican gains to just a single seat this year.

That both parties are even competing here is extraordinary. A Democrat has not won a Senate seat in Mississippi since 1982, and few in either party believed this special election would break that streak. But last week, the video emerged with the “public hanging” comment by Hyde-Smith, who was appointed this year to fill the unexpired term of former Sen. Thad Cochran.

Until Tuesday, she had refused to address her comments in the video. And in a news conference about a different matter immediately after the comments surfaced, she only pointed to a written statement her campaign had released — repeating a variation of “I put out a statement” eight separate times.

Her polling advantage dwindled, companies withdrew their contributions to her, and liberal money flooded in for Espy. Republicans moved to dispatch Trump in Mississippi again, scheduling election eve rallies in Tupelo and Biloxi.

For her part, Hyde-Smith has largely retreated from public view in the aftermath of the controversial videos, making Tuesday night’s forum particularly pivotal for her candidacy.