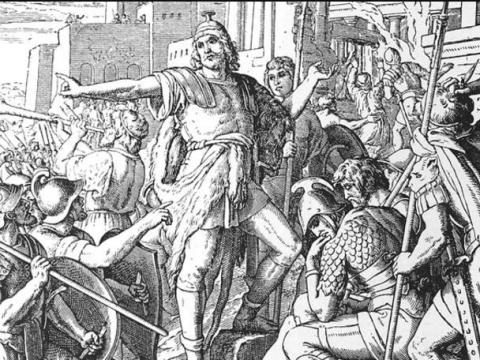 EDITOR'S NOTE: Rabbi Eric Solomon is a spiritual leader of Beth Meyer Synagogue in Raleigh and serves on the board of Truah: The Rabbinic Call For Human Rights.

Ask a Jewish American, what does Hanukkah commemorate?

You will likely hear the generations-old tale of how a measly canister of oil was supposed to burn for one day and miraculously lasted for eight.

But that answer is only a small part of the story. Even more significant, Hanukkah celebrates the removal of a statue.

According to the Book of Maccabees, nearly 2,200 years ago, the Seleucid Greeks entered the Land of Israel, decimating the Jewish community in its wake. When the Seleucids trekked up to the Temple in Jerusalem, they placed an idol of the Greek god Zeus in its center, the Holy of Holies.

The peak of that mountaintop, Jewish tradition taught, was the foundation stone of the world. Our great forefather Abraham nearly sacrificed his son Isaac on that spot. The Temple was God’s dwelling-place on earth. No piece of land was more precious.

By placing a statue there, the Greeks sent a not-so-subtle message: We Greeks, are all-powerful. You, Jews, are weak and worthless.

The polar opposite of the Torah’s command: “Love your neighbor as yourself.” It was a crystal-clear expression of hatred and denigration.

While the Book of Maccabees partially details the community’s response to this affront, we can use our imagination. Some Jews likely ignored the statue, convincing themselves it was a meaningless piece of marble. Others might have found it offensive but were too afraid to risk their lives to remove it. Still others, having internalized their oppression, came to admire it.

But the heroes of the Hanukkah story, the Macabees, believed that the statue’s presence was impossible to bear.

For a statue is much more than a piece of molten rock; it sends a message. In this case, a Greek Empire that viewed itself as omnipotent and the Jews as lower than dirt. As long as that statue filled our holy space, we were forced to stomach its message. Only with it gone could we hold our heads up high.

Today, states across the South face a remarkably similar challenge. Confederate statues line the sacred grounds of the public sphere: state capitols, courthouse squares, main streets and university campuses. Like the sculpture of Zeus in the Temple of old, these figures send a vile message to people of color and all who oppose white supremacy. In 21st century America, they too are impossible to bear.

Every time I pass one, I shudder: “What if, after the Holocaust, descendants of Nazis erected statues of Hitler or Third Reich soldiers like these?”

All good-minded people know the answer to that question. It was the same one that Judah Macabee gave more than two millennia ago.

The University of North Carolina is our state’s equivalent to the “Holy of Holies.” It must not be known for tolerating, supporting nor funding these idols seeped in bigotry.

Judah Macabee understood this. The UNC leadership must heed this lesson as well.

In the next few days, when you see lit Hanukkah candelabras in Jewish homes throughout the Triangle, I invite you to not merely recall the miracle of the oil. But also be reminded of the bold message of the candles in the window.

There are no statues on the windowsill. Just the light of God’s love blazing forth to banish the idolatry of hate.

In this sacred season, may our state’s leaders take this equally-important Hanukkah teaching to heart.