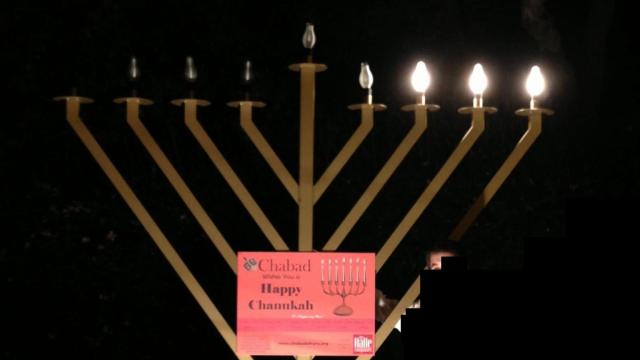 Editor’s note: Rabbi Eric Solomon, the spiritual leader of Beth Meyer Synagogue, serves on the national board of Truah: A Rabbinic Call for Human Rights.

Today, the first day of Hanukkah, Jews in North Carolina and across the nation face a painful question.

Should they place the Hanukkah lamp (hannukiah) in the window or on the kitchen table?

To many, the question seems insignificant -- a difference of a few feet. But for the Jewish community, and perhaps even for our country, the answer is as important as ever.

Two thousand years ago, the Rabbis mandated the hanukkiah be placed in public view. Passersby should be reminded of the miracles of Hanukkah -- how a group of courageous Jews rose up against their oppressors and, upon victory, lit the Jerusalem Temple’s lamp with one night’s worth of oil that ended up lasting eight.

The Sages also knew not every society would welcome such a public display of Jewish pride. They offered a stipulation. “In a time of danger, one may place the hanukkiah on the table.”

Growing up in Maryland, some of my fondest family memories were of our Hanukkah celebrations: Lighting the candles; Singing holiday songs; spinning dreidels (tops) and; eating latkes (potato pancakes). The hanukkiah was always placed in the window.

Not that there wasn’t a reason for concern. My experiences of anti-Semitism were rare but unforgettable:

-- In high school when three older students pushed me up against a locker, threw a few pennies at my feet and taunted me, “Let’s see if the Jew-boy picks them up!”

-- When my mother, a public school teacher in a rural county, walked into the school entryway one morning to see spray-painted above the arch, “Solomon is a Jew!”

-- When a kid on my soccer team told me, during a break in practice: “Do you know that you are going to Hell?”

Painful as these incidents were, they are small blips in a childhood filled with an overwhelming sense of acceptance. Whenever someone attacked, there were righteous non-Jews who stepped forward and assured us that they would not stand idly by while their neighbors bled. Their acts exemplified the best of the American spirit.

Ever since Charlottesville -- where unhooded white supremacists marched; yelled “Jews will not replace us!”; committed heinous acts of violence; and received approbation from some political leaders -- I, for the first time, have taken serious pause.

I have no doubt the vast majority of Americans, as polls consistently show, vehemently reject bigotry and antisemitism. They welcome the Jewish community as part and parcel of American life.

In the face of the recent uptick in attacks, the support of local clergy and religious organizations has been nothing short of angelic. As one Muslim friend expressed in an email: “In the wake of all of the recent anti-Semitic…acts of bigotry, I want to let you know that my heart truly aches. …May God protect you from hate and discrimination of any type.”

Receiving notes like this, we know you have our back.

But I also do not doubt that there is a sliver of American society that bears hatred for all minority groups: Jews, people of color, immigrants, Muslims, the LGBTQ community, among others.

In this prevailing climate giving that sliver outsized prominence, putting the hanukkiah in the window is not merely an expression of one community’s religious devotion. It is a statement about the kind of America in which we all wish to live.

The late Rabbi Hugo Gryn, a survivor of Auschwitz, once shared how he celebrated Hanukkah with his father in the camps. The young Hugo was shocked to see his father melt down his small ration of margarine to use as a wick for the first night. He chastised his father: How could he use their precious food and risk their lives simply to observe a holiday?

This week, when you drive through Raleigh and chance upon a hanukkiah flickering in the window, you will now know that the family residing there chose hope.