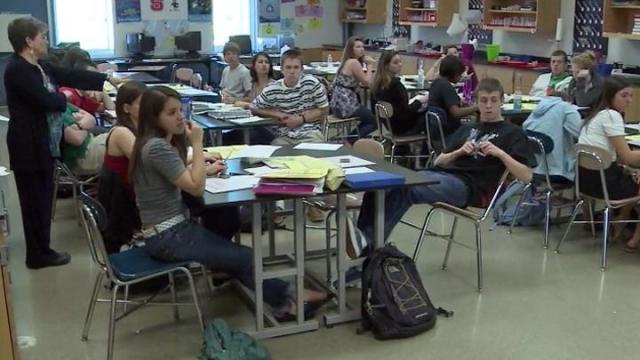 Raleigh, N.C. — North Carolina spends more than a third of its $20.6 billion annual General Fund budget on K-12 public education every year, making it the biggest expenditure of state taxpayer dollars that the General Assembly oversees.

Between pay freezes in prior years, a new law that moves teachers away from career status toward a series of short-term contracts, lawsuits and proposals to raise salaries for teachers who have been in the profession fewer than 10 years, the bottom line on teacher pay is hard to find.

This Q&A answers some of the most frequent questions about teacher compensation.

Q: Changes with regard to 'career status' for teachers and their contracts were put into place as part of the budget bill that passed in the summer of 2013. What was the salary system up until then?

In North Carolina, the state pays the bulk of a teacher's salary. That base pay is set by law and arranged . As teachers spend more time in the classroom, that salary schedule says they should get "step" increases, such as those outlined in the 2013-14 salary table.

Q: Teachers have said their pay raises have been few and far between. How long has it been? And have teachers been getting those step increases?

Even more problematic for many educators, teachers have not been allowed to progress through their salary steps since 2009. That means that most teachers, unless they have gained a new certification or changed jobs, are making only 1.2 percent more in 2013-14 than they would have in 2008.

For example, a teacher with a bachelor's degree in his or her first year of teaching during the 2008-09 school year would have made $30,430. According to the 2008-09 salary schedule, that teacher would have expected to make $35,380 during the 2013-14 school year even if lawmakers didn't offer a pay raise. Instead, because the steps have been frozen, those teachers are making just $30,800.

One estimate by the Department of Public Instruction says it would cost $400 million to place teachers back on the salary schedule as it existed in 2008-09.

Q: What is this teacher "tenure" I've been hearing about? And how is it connected to contracts that teachers have been offered?

Under existing law, teachers who have taught for at least four years and are in good standing can be granted "career status." This status essentially gives a teacher due process rights so they cannot be disciplined or fired without the school district following specific procedures. Career status is often called "tenure" as a shorthand. Here's how it is explained in "Working in North Carolina's Public Schools," a 2011 publication by the Department of Public Instruction:

Lawmakers, led by Sen. Phil Berger, have voted to phase out this system entirely. Under the law as it was rewritten in 2013, teachers who had not achieved career status as of the end of the 2012-13 school year will never be eligible. Starting in the 2018 school year, no teacher in North Carolina will have career status. The new system will place teachers on a series of contracts, ranging from one to four years, depending on experience and job performance.

As an inducement to get some teachers with career status to move to the new contract system before the 2018 school year, lawmakers have offered pay raises to some teachers who opt into the system early.

Q: Why are some teachers being offered contracts for the 2014-15 school year? Which teachers will get them and when?

Beginning in the 2014-15 school year, school systems have been directed to identify their top performing 25 percent of teachers. Those teachers could receive a series of $500 salary bumps over the next four years. As a condition of the pay raise, they must relinquish their career status.

There have been two figures commonly used to quantify this raise in salary. The easiest to understand is a $2,000 total because, in the fourth year of the contract, a teacher would be making $2,000 more in overall annual salary.

Proponents of the contract plan also like to point out that a teacher who accepts one of these contracts will earn $5,000 more over the life of the four-year contract.

Because both of these numbers have appeared in news coverage, many have been confused over the actual amount of the raise. To explain, it's helpful to think of a fictional teacher who would have been making $35,000 before she signed her contract. This teacher decides that she is going to set aside all of the money she earns over and above $35,000 in a bank account. Without accounting for taxes, health insurance and other deductions, her earnings would look like:

So, at the end of four years, our example teacher is making $37,000 a year, a $2,000-per-year salary increase. Because she saved all of her additional salary that came as a result of signing the contract, our teacher has $5,000 more in the bank than if she had never signed the contract.

Berger's office estimates this "Pay for Excellence" program will raise pay for 22,500 to 25,000 teachers.

Q: Why the opposition to the contract system?

There are several issues at play. Some education officials object to removing career status because they said it's a right teachers have earned.

"What career status provides for teachers, among other things, is their right to due process," . "Their right to a hearing if they are fired, I think that's a really reasonable thing for our staff to get for the hard work that they give us."

Teachers and teachers organizations have talked about unilaterally turning down the raises.

"We work together a lot as teachers. We plan lessons together; it’s a joint effort," said Breanna Tapp, a decorated math teacher at Athens Drive High School in Raleigh. "I feel like it could tear some departments apart overall, bring the morale down and discourage those who don’t get it. What if you’re not in the top 30 percent?"

On March 17, the Guilford County and Durham school boards formally filed suit against the new law, saying they should not be forced to take away tenure rights in exchange for raises. Documents in the suit are available online.

At least 32 of the state's 115 school districts have voted to resist the law or seek a change in some way, according to the North Carolina Association of Educators. Wake County, for example, has asked lawmakers to repeal the teacher contract law.

Gov. Pat McCrory has said that he will review whether he will ask lawmakers for changes to the new law.

Source: NC Association of Educators and local school districts.
Click a red or green county on map for more information.

Counties where school boards have not taken action

Counties with more than one school district where at least one of those districts has passed a resolution.

Counties with whole-county school districts that have passed resolutions against the teacher pay policy.

Q: I heard Gov. McCrory and top Republican legislators wanted to put a pay raise in place for teachers. What does that plan look like?

This plan is separate from the teacher contracts and tenure issues. During a Feb. 10, 2014, news conference, they wanted to boost pay for teachers in their first nine years of the profession.

It's worth noting that the legislature's Educator Effectiveness and Compensation Task Force, a group studying teacher salary, recently heard testimony from experts such as Duke University professor Jacob Vigdor, who suggested that the state should do more to pay teachers earlier in their careers and should smooth out pay spikes offered to those who have been teaching for a long time.

"You're trading off this higher salary now for a little bit lower salary down the road," Vigdor told lawmakers.

Lawmakers are also considering other ways to reward teachers for their performance.

Q: I've heard teachers are upset about not getting paid more for having a master's degree. What's that about?

Currently, teachers with master's degrees earn about 10 percent more than colleagues with bachelor's degrees. But according to Alexis Schaus, the Department of Public Instruction's business director, teachers are facing a deadline.

"As it stands now, a teacher must be paid on the master's schedule before July 1 to be eligible for master's pay," Schaus wrote in an email.

After that time, teachers who earn a master's degree will not get the extra pay.

Vigdor suggested to lawmakers on the educator effectiveness task force that there was little scientific evidence that a master's degree alone led to better teachers or better student performance. There is evidence that when a specialized teacher earns a degree in his or her topic area – for example, when a math teacher earns a master's degree in math – student performance does improve. That suggested the state might consider offering increased pay for certain types of master's degrees, he said.

Some lawmakers have discussed restoring the pay boost for earning a master's degree, but that is something that will be decided in the 2014 legislative session, which begins in May.

The state also offers teachers a higher salary if they receive national board certification, a recognition of their accomplishments in the classroom. To this point, state law has left those salary increases in place.