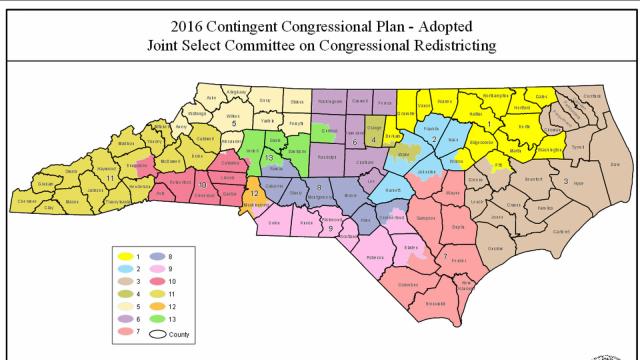 Although the biggest change comes in how the state's 13 U.S. House districts are drawn, contests up and down the ballot will be affected.

Voters will still head to the polls to vote in the presidential primary, bond referendum and dozens of other state and county offices on March 15.

But if – and it is still a question at this point – the General Assembly's mid-February effort to draw new congressional maps holds, voters will have to come back to the voting booth on June 7 to settle U.S. House primaries.

Here are the most frequent questions WRAL News has gotten about the 2016 election and their answers. You can scroll through or jump to a question.

Q: I missed something. What's going on?

Every 10 years, following the U.S. census, state lawmakers redraw the state's congressional and legislative districts. Following the 2010 census and subsequent 2011 legislative redrawing, a group of voters and advocacy groups sued the state to overturn those maps.

On Feb. 5, a three-judge federal court panel did just that, saying that lawmakers had unconstitutionally packed too many black voters into the state's 1st Congressional District, which sprawled through northeastern North Carolina, and the 12th Congressional District, which ran up Interstate 85 from Charlotte to Greensboro. The court ordered the state to redraw the maps.

Q: Why are state lawmakers drawing federal maps in the first place?

The U.S. Constitution and federal law hand off the job of drawing congressional boundaries to the states. That means each state gets to set its own procedure for redrawing districts. While there are some states where an independent commission redraws the districts, North Carolina is like the majority of states that leave the job in the hand of state lawmakers.

Q: Wasn't there some question as to whether North Carolina would use the new maps?

There was, but that appears to be mostly settled at this point. Late on Feb. 19, the U.S. Supreme Court issued an order saying it would not stay the three-judge panel's order. That triggered provisions in the two redistricting bills lawmakers passed in February changing the dates and maps for the U.S. House election. Barring something unexpected, the state is going with the new schedule and the new maps, if they are approved by the courts.

Q: What happens next? Speaking of unexpected, what happens if the federal court doesn't like how lawmakers redrew the map?

Lawmakers have now sent their new maps back to the three-judge panel. The court isn't bound by any particular timeline, but plaintiffs in the case have asked the court to rule by March 18. The federal court can either accept the new maps or reject them.

If they accept them, the plaintiffs could still appeal if they're unhappy.

If they reject the maps, things get a little less certain once again. In the past, when courts have rejected a second attempt at drawing maps, either the judges or someone they appoint – often a special "master" – will take a crack at redrawing the maps. But that's speculative. It's entirely possible the court could send the maps back to lawmakers to try again a third time or do something else.

Q: How do I know what district I live in under the new maps?

Voters in 13 counties, including Wake Durham, Johnston and Cumberland, will have to double check. County and state boards of elections will notify voters of their new districts before the June 7 election.

In the mean time, WRAL News has created a tool so people can see if their congressional district has changed and, if so, how. Just enter any address for a look at how the lines have or have not changed in that location.

DISCLAIMER: Address locations are estimates based on Google's geolocation service, with boundaries from official maps provided by the N.C. General Assembly. Keep tabs on your official current district through the N.C. State Board of Elections website. The 2016 map won't take affect until it gets federal approval.

Q: Is there still a primary on March 15? What if I already have an mail-in absentee ballot?

Yes. The only primaries that are moving to June 7 are the ones for U.S. House. There are dozens of other ballot questions, including a $2 billion bond referendum and races for county commissioner, state legislature and president that are still on the March 15 primary ballot.

State Elections Director Kim Strach said last week that voters should fill in their entire ballot on March 15, including the races for U.S. House. She told lawmakers that voters should let elections officials worry about which votes count and which don't.

Q: What happens to the votes cast for U.S. House on those March 15 ballots? Will the board of elections announce results?

No. Lawmakers have ordered the State Board of Elections not to release vote totals in connection with the U.S. House votes cast on March 15.

Q: Did my precinct change? Is this going to change where and how I vote?

The only thing that changes is that you'll have to head to the polls again on June 7 to vote in the U.S. House primary.

Q: What happens to runoff elections this year?

There are no runoff elections this year.

For those who are unfamiliar, candidates running in primaries usually are required to get at least 40 percent of the vote in order to win outright. If they fall under that 40 percent mark, the second-place finisher can call for a second primary (a runoff).

However, lawmakers canceled runoffs for all races this year. That was partly a cost-saving measure so that counties would not end up with the added cost of an unexpected extra election on their hands. There was also a technical issue dealing with who would be eligible to vote in the second primary and who would be able to vote in the new congressional primary. Elections officials said their system could not juggle the two different electorates at the same time.

Q: If an unaffiliated voter chooses to participate in one party's primary in March, are they locked into that same party for June?

The slightly longer answer: In North Carolina, voters registered as unaffiliated may choose to vote in either the Republican, Democratic or Libertarian primaries or simply cast a ballot in nonpartisan contests.

However, there are no second primaries this year, and the U.S. House election on June 7 will be a whole new election, which means an unaffiliated voter can choose to cast a ballot in one party's primary on March 15 and vote in another party's on June 7.

Q: Are there other changes to this year's election because of the congressional redistricting bill?

The new primary date for U.S. House races, the new maps and elimination of the second primaries are the big changes most voters will notice.

Those involved with party politics will have some extra work to do. That's because political parties use congressional districts for much of their organization. So, for example, the delegates who go to a party's convention are chosen based on the primary vote for president in each congressional district. As a result of redistricting, parties much now reset how those delegates are organized and who represents which district at the conventions.

Q: When is the new congressional election?

June 7, although there will be an early voting period just as with the March 15 primary.

Q: Will the candidates for Congress change?

Because the lines on the maps changed, some candidates found themselves drawn out of the districts in which they were running. Republican 13th District Congressman George Holding, for example, now lives nowhere near the newly drawn 13th District on the 2016 maps. He says he will run in the new 2nd District and challenge Congresswoman Renee Ellmers in the Republican primary.

Members of Congress don't have to live in the districts they represent, but living far away from your constituents is traditionally viewed as a big handicap.

Q: So is this it? Is all the turmoil with elections over?

Not exactly. Aside from the potential for the three-judge panel to reject the U.S. House maps, there are other court cases dealing with North Carolina elections out there. Most notably, there is a separate federal court challenge to the state legislative districts from which North Carolina's 50 state senators and 120 state representatives are elected. That case relies on many of the same arguments as seen in the U.S. House case and goes to trial in April.

Q: What does all this cost and who pays for it?

In North Carolina, counties bear the brunt of the costs for elections. State election officials estimate that, across all 100 counties, it costs somewhere between $9 million and $10 million to run a statewide primary.

But counties won't have to run runoff elections this year. In all likelihood, the change in election schedule is either a wash for counties, or they will incur some added expense but nothing close to the full $9 million price tag. The cost related to the various lawsuits is a separate question, and that bill is growing.