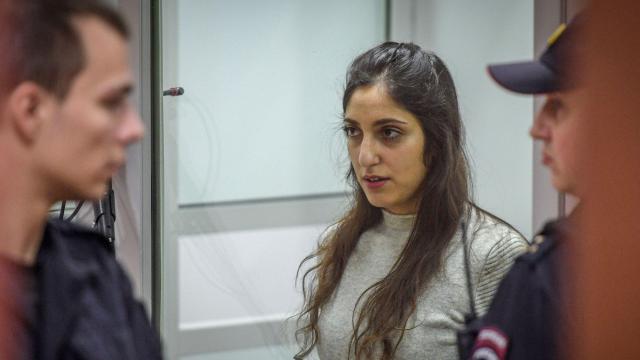 CNN — An American-Israeli woman jailed in Moscow on drug charges is expected to fly home with Israeli Prime Minister Benjamin Netanyahu after she was granted a presidential pardon and released from prison.

On Wednesday, Russian leader Vladimir Putin pardoned Naama Issachar, a 27-year-old dual American-Israeli citizen, who had been in prison since April and was sentenced to seven-and-a-half years. She was stopped at Moscow's airport with 9.5 grams of marijuana in her checked luggage.

A Kremlin statement earlier said Putin's pardon was based on "humanitarian principles."

Netanyahu met with Putin on Thursday and was expected to fly back to Israel with Issachar, in what will be regarded as another political win for the embattled leader following the White House's unveiling of its Middle East plan unveiled on Tuesday.

Just hours before the plan was released, Netanyahu was formally charged for bribery, and fraud and breach of trust, in relation to three corruption cases, in what could be a blow to his chances of victory in March elections. Netanyahu has denied wrongdoing.

Ahead of their talks, Netanyahu said Putin was the first leader he was meeting after his visit to the White House and the release of President Trump's Middle East plan, which Netanyahu referred to as "the deal of the century."

"I think there is now a new opportunity, and I want to talk to you to get your thoughts. We need to see how we can get our strength together for security and peace. Russia and Israel relations have never been better. Thank you for your leadership in this," he said, adding his thanks for Issachar's release.

Trump's Middle East proposal has been outrightly rejected by Palestinian authorities, who were not involved in talks with the White House over the plan.

Putin's pardon came nearly a week after the leader met with Yaffa Issachar, Naama's mother, and Netanyahu in Jerusalem. Since her arrest, Netanyahu has repeatedly pleaded Issachar's case with Putin, asking the Russian President to pardon her and allow her to return to Israel.

Issachar had appeared to be caught in a three-way diplomatic battle between Israel, Russian and the United States, for some time.

Moscow was trying to secure the release of Aleksey Burkov, an IT specialist wanted in the United States on charges of hacking and credit card fraud. Burkov was arrested at Israel's Ben Gurion airport in December 2015 as he was leaving the country.

Burkov's family previously suggested a prisoner swap between Burkov and Issachar, according to Russia's state-run RT television channel. However, he was extradited to the US in November.

Israel recently decided to hand ownership of a parcel of property in Jerusalem's Old City to the Imperial Pravoslav Palestine Society, a Kremlin-aligned religious organization.

The property, known as the Alexander Courtyard, sits outside of the Russian Orthodox Alexander Nevsky Church. It had been subject of years-long legal dispute between two Russian organizations until Israel's Justice Ministry decided it belonged to the one more closely tied to the Kremlin.