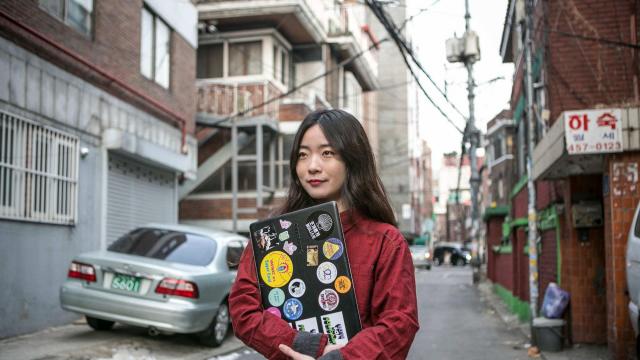 SEOUL, South Korea — Lee Na-yeon was 18 years old and in her first semester in college when she discovered, to her dismay, that she was pregnant.

Lee went to a hospital and had an abortion. But as a graduate of a Catholic high school where she had been shown graphic videos portraying abortion as murder, she felt scared and tormented by guilt.

She had also broken the law.

Abortion is illegal in South Korea with just a few exceptions, such as when a woman has been raped or her health is at risk. It is one of just a handful of the world’s richest countries to have such restrictive abortion laws. Women can be sentenced to a year in prison or ordered to pay fines of 2 million won (about $1,840) for having abortions, while doctors who perform them can get up to two years in prison.

Now, a group of women’s advocates is pushing to overturn the ban, and the country’s Constitutional Court is set this year to review a case that challenges the law’s constitutionality.

Last fall, more than 230,000 people signed an online petition submitted to the presidential office, known as the Blue House, calling for abortion to be legalized.

The activists are seeking to bring the law closer to the current reality. The ban on abortion is rarely enforced, and it is relatively easy for women to find willing doctors at clinics. According to a government estimate, based on a survey of women of childbearing age, 169,000 abortions were conducted in 2010, the latest year for which data is available from the Health and Welfare Ministry.

That number, which represents close to 16 abortions per 1,000 people, gives South Korea the 10th-highest abortion rate among the 35 mostly high-income countries that are members of the Organization for Economic Cooperation and Development.

But independent analysis by public health scholars suggests that the real number is much higher. According to research by Park Myung-bae, a professor at Pai Chai University in the city of Daejeon, the annual tally is as high as 500,000 or more — greater than the number of babies born in South Korea in 2016.

And few women or doctors are prosecuted for abortion. Last year, according to the South Korean Supreme Court, just 25 such cases went to trial, with four leading to convictions. For decades, the government’s enforcement of the ban has waxed and waned with the prevailing population trends.

Advocates calling for an end to the ban have long argued that South Korea’s laws violate a woman’s right to make choices about her body. Even in the limited instances when an abortion is legal, a woman must get permission from her spouse or cohabiting partner.

Kim Jin-seon, head of the women’s health team at Womenlink, a nonprofit advocacy group, said the abortion law is rooted in broader biases against women in South Korea.

“Everything is related to how the government views the existence of women, and whether they are just looked at as vessels to give birth or if they are concerned about the quality of life of women as full-fledged citizens,” Kim said.

So far, the administration of President Moon Jae-in has agreed only to research the question of overturning the ban. In a video statement in response to the petition, Cho Kuk, a senior presidential adviser, said the administration hoped to “find a new balance” in a debate about the rights of women and fetuses.

He acknowledged that the abortion ban was “making the operation more expensive and pushing people to get dangerous procedures or even to travel overseas.”

Lee Jin-sung, chief justice of the Constitutional Court, said during his confirmation hearing that the court would consider making abortion legal for at least part of a pregnancy.

Abortion rights advocates say that even with lax enforcement, women will be subject to political whims as long as the law is in place.

“The president could just at the stroke of a pen say, ‘That’s it, we’re going to have zero tolerance now,'” said Heather Barr, a senior researcher at Human Rights Watch in London, adding that “everyone is living under a hanging sword all the time.” The law also creates a culture of shame among women, activists say.

“They are silenced because abortion is stigmatized and considered immoral,” said Lee Yu-rim of the Sexual and Reproductive Rights Forum, a group that participated in protests in Seoul in November calling for legalization.

For years, officials turned a blind eye to the prevalence of abortion as they sought to advance social goals. In the 1970s and 1980s, as South Korea’s population grew rapidly, the government mounted a campaign to control the birthrate, issuing propaganda posters with slogans like “It’s too crowded in Korea” and “Even two is too much.”

Obstetricians and legal scholars say that abortion, which has been banned since 1953, was tacitly encouraged in those years. In 1973, the government revised the law to allow abortions for rape victims and couples who could prove they had hereditary diseases.

“It was used as a population control means,” said Dr. Yoon Jung-won, an obstetrician at Green Hospital in Seoul and a researcher with the Center for Health and Social Change, a nonprofit organization. In conservative South Korea, she said: “Nobody really saw it as a right. Even among the activists, the idea of the right to have an abortion was considered a Western concept.”

As the birthrate began to fall precipitously in the 2000s, the government again turned to the abortion law — this time, suggesting that it might be enforced more rigorously. In 2009, it issued a report calling for a new anti-abortion campaign, among other measures, and some lawmakers hinted that the authorities would begin to crack down. A group of physicians formed the Pro-Life Doctors Association in 2009 and began reporting clinics known to perform abortions to the police. The courts punished only a handful of doctors, but the publicity initially had a chilling effect.

“This new organization scared off the doctors and made them hesitant to perform abortions,” Yoon said. As a result, the price of an abortion quadrupled, and some women sought the procedure in Japan or China, she said.

“But after that, everything went back to normal,” said Chong Hyon-mi, director of the Institute for Gender and Law at Ewha Womans University in Seoul.

Dr. Cha Hee-jae, president of the Pro-Life Doctors Association, said some obstetricians became abortion providers because the declining birthrate had made it hard for them to earn a living.

An obstetrician himself, Cha, who works in a village of about 6,000 people east of Seoul, said most of his income now comes from cosmetic procedures and treatments for back pain.

Cha, a devout Catholic, said he simply wanted the government to enforce the law. “Our mission is to decrease the number of abortions taking place,” he said.

Another supporter of the ban is Choi Yi-hwa, 38, a part-time Korean teacher and mother of two who had one abortion in college and another in her 20s. She said it took her years in counseling to recover from her trauma and feelings of guilt.

“I still feel that there was sin involved,” she said. Keeping abortion illegal, she said, forces women to think deeply about their decision.

But abortion rights advocates say the law does little to deter abortions in a culture where birth control is not widely embraced. Many women are not aware of contraception options like the birth control pill or IUD, and even a recent proposal by the Education Ministry for a new sex education curriculum recommended the withdrawal method as a primary way to avoid pregnancy.

Lee Na-yeon, now 23, is in her final year of university as a philosophy major. She said she became pregnant because her boyfriend did not want to use a condom. “We were stupid,” she said.

Having an abortion made her feel dirty, Lee said, and because it was illegal, she didn’t feel she could talk about her experience with anyone. But over time, she said, she came to realize that she made the right choice. She now wants the law to be changed so other women won’t go through the anguish she did.

“People can start to think that they haven’t committed a sin, and can feel more at ease to make these decisions,” she said.