Purpose over paycheck - why employees want meaning, not just money 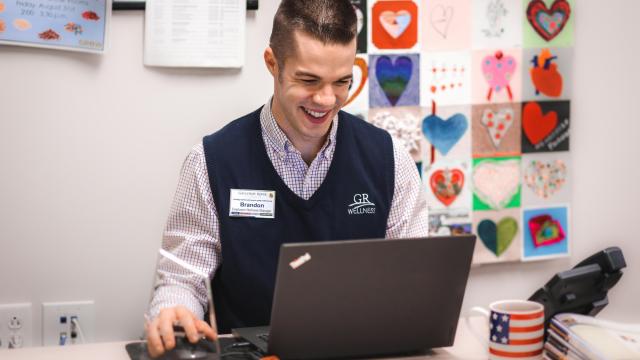 Money can't buy happiness — or at least that's how the saying goes.

While this may be true for some and inaccurate for others, studies reveal that financial incentive isn't the sole indicator of job satisfaction for employees. The purpose behind the paycheck is also important.

A 2016 Cone Communications study found that meaningful work is particularly valuable among millennials. While millennials currently account for roughly 30 percent of all workers, they are projected to make up 75 percent of the workforce by 2025.

Much like millennials, employees of Galloway Ridge find meaning in their work every day.

"Getting that intrinsic reward out of your job, somewhere that you're going to be for 40 hours a week, really adds a lot of value to a job," said Jamie Lewis, an exercise physiologist and personal trainer at the Duke Center for Living at Fearrington Village.

Galloway Ridge residents are able to use the Duke Center for Living facilities, and Lewis works with many of them.

"Meaningful work doesn't make up for things like not getting a livable wage, but it does add a lot to a job's value," Lewis continued. "Working in fitness, we get into it because we know that we love what we do and we get to combine our passion with work."

Many of Galloway Ridge's current employees are millennials, which is reflective of the population's growing presence in the workforce at large.

Lewis, 30, has worked with athletes, children and middle-aged adults, but said he enjoys working with an older demographic because of how much they care about their health given their current season of life. Working with seniors has helped Lewis shift his outlook on fitness by focusing more on the health benefits of exercise rather than the aesthetic rewards.

"They just want to be healthier. Most of them aren't coming in here to fit into a bathing suit next summer. They're coming in here because they want to be healthier and live longer and be able to be independent," he said. "That makes me feel like my job's a lot more important because I'm not just training somebody for a couple of months so that they can look good. I'm training people so that they can do the things that they like to do, and that means a lot to me. It's very intrinsically rewarding when you get to see that play out."

Amber Bishop is the director of community navigation at Galloway Ridge. She said it's a "fancy title" for what she really is: a social worker. Bishop's primary role is to help a resident transition from independent living into a hospital setting and eventually coordinate their discharge from the hospital. She then facilitates their admission to either skilled nursing, assisted living or brings services to their independent living home.

She also builds trusted relationships with residents who are going through challenges.

"I think a lot of the time it is an emotional issue that has come up and it's very uncomfortable for a lot of people to talk about those sorts of things and be present with someone who's upset — they're with their dying spouse or they've just lost their spouse, or a family who has lost a parent or a grandparent. So those are some of the things that really connect me to the residents," Bishop said.

Originally interested in public health, Bishop soon discovered it was too broad of a pursuit and that social work was a better fit for her since she likes to work with individuals one-on-one.

Over the four years she has worked at Galloway Ridge, she has advanced her career and noted the time, effort and money Galloway Ridge puts into their employees. While her role and responsibilities have changed since first arriving, her dedication to her work has remained constant.

"Initially, I was hired to do therapy with residents and that was supposed to be my only goal," Bishop said. "But as I worked here and I got to know some of the residents, I realized some of the areas that needed improvement at Galloway Ridge, especially as they moved through the continuum of care and needed more assistance. I kind of started my own social work campaign here at Galloway Ridge, and worked on helping residents through that emotional period of moving to a different level of care and leaving their independence and their independent living apartment for more services."

In creative industries such as art and music, the concept of "nurturing talent" is often discussed. However, Bishop's career trajectory at Galloway Ridge serves as an anecdote that confirms this notion is true in any industry and for any role. Helping employees find their purpose keeps them happy and also makes the company better as a whole.

"When you know the 'why' of an organization, you understand what the purpose of your work is," said Missy Johnson, senior director of marketing and sales at Galloway Ridge.

Johnson said the company is really intentional about how it treats both its employees and its residents. Everything Galloway Ridge employees do is a reflection of the company's core values — caring, empowering, integrity and commitment — no matter the role or responsibility.

"Not only do we speak our core values, we live our core values. We work where our clients live. Every day we have interaction with our residents and I think that's something that is so unique," Johnson said, noting that millennials are enticed by opportunities at Galloway Ridge because of the purposeful work. "We are able to make a difference in the lives of people. There is reward in that from the people we are serving."