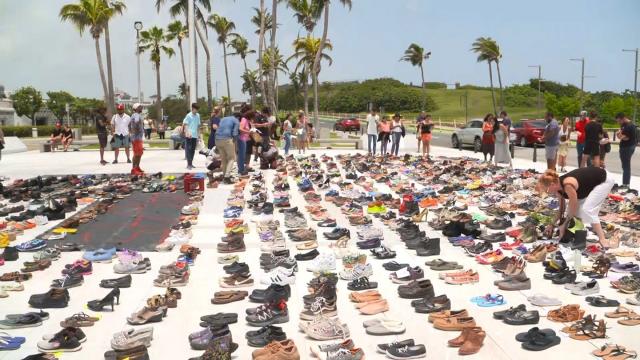 SAN JUAN, Puerto Rico (CNN) — The Puerto Rican government on Tuesday released to CNN and another news organization a database of information on all deaths that occurred after Hurricane Maria, which pummeled this US commonwealth on September 20.

Officials had attempted to stall on the delivery of this information, filing a motion on Monday asking a court to vacate a requirement that the data be delivered by Tuesday.

A judge rejected that motion and officials on Tuesday turned over a database containing information on all the thousands of people who died in Puerto Rico after the storm. Additionally, officials said they planned to make 24,000 death certificates available within five business days. They planned to make 1,000 of those death certificates available to journalists on Tuesday.

CNN and the Center for Investigative Journalism (CPI) in Puerto Rico sued the Puerto Rican government in February for death certificates and other records following Hurricane Maria.

CNN plans to use the records to further investigate deaths that followed that storm. The data will include many deaths that occurred after the storm but were unrelated to Hurricane Maria.

The network intends to post all of the names online in a searchable database and to ask its audience to help investigate which of the deaths were related to the storm.

Puerto Rico's official toll from the storm is only 64 dead; evidence suggests many times that number of people may have died in the storm and its chaotic aftermath.

It may never be possible to know the actual toll of Hurricane Maria, but this data could yield new clarity about who died in the protracted aftermath of the storm. Millions remained without power in Puerto Rico for months, far longer than after other recent US storms.

The Puerto Rican government had argued much of this documentation should be kept secret out of concern for the privacy of people who died in the aftermath of the hurricane.

While his government fought in court to keep these records private, Puerto Rico Gov. Ricardo Rosselló argued publicly that commonwealth authorities were promoting transparency, telling CNN's Anderson Cooper there would be "hell to pay" if records were withheld.

"I really want this to be very transparent," the governor said in that May 31 interview. "I want the truth to come out. That's the bottom line. And I want us to learn from this tragedy."

Government attorneys on Tuesday asked journalists from CNN and CPI to sign a document saying that, "With the delivery of this information the recipient acknowledges the confidential character of the information delivered, and that wrongful management of this information could imply violations to the penal code of Puerto Rico and other laws."

The journalists refused and officials agreed to release the information without that requirement.

Rosselló in February announced Puerto Rico had hired George Washington University to investigate the death toll. An initial review was expected in late May but has not been released.

Puerto Rico -- a US commonwealth where residents are US citizens but cannot vote for president and don't have a voting representative in Congress -- does not have a clear public records law, experts say. That means that journalists and researchers seeking information the government does not want to release often file lawsuits in order to obtain public records.

The toll initially came under scrutiny after US President Donald Trump visited the island in October and praised the relatively small death toll from the storm, then 16.

That figure jumped to 34 after Trump left Puerto Rico, later that day.

In October, CNN highlighted uncounted deaths in one town. In November, the network surveyed 112 funeral homes across the island -- about half the total -- and found that funeral home directors and staff believed at least 499 people had died for reasons related to the storm and its aftermath. That investigation prompted an immediate response from the Puerto Rican government, which "implored" funeral home directors to come forward with information.

Subsequently, academics and journalists analyzed aggregate death data for the months after the hurricane and compared that to the total number of deaths during that time in previous years. Researchers found that about 1,000 "excess deaths" appear to have occurred in the months after the storm.

In March, CNN reported that people in Maunabo, Puerto Rico -- a community that was largely without power almost six months after the storm -- were still dying without access to basic services. Natalio Rodriguez Lebron, 77, died in January, for example, after waking up unable to breathe. The family couldn't afford to run a generator to power his breathing machine.

Experts criticized the federal and Puerto Rican government's response to the storm as slow and questioned whether these deaths would have occurred if services had been restored sooner.

"It's unconscionable and unreasonable that it has taken so long" to restore power, Dr. Irwin Redlener, director of the National Center for Disaster Preparedness at Columbia University, said at the time. "You have to ask yourself, 'why is that?' It's money and politics, the common denominator for so many things. ... Can you imagine no (electric) power in Beaumont or Port Arthur or Rockport, Texas, for this amount of time? I don't care what kind of disaster it was. You would never see this."

Federal officials have said they responded to the crisis in Puerto Rico as they would to any disaster on the US mainland and that logistical challenges presented by the Caribbean island -- its remoteness, the impassability of its roads, the poor state of its infrastructure before the storm -- slowed down efforts to restore electricity and other basic services. Although power had been restored to nearly all customers, according to Puerto Rican authorities, thousands remained without power on the island in early June, more than eight months after Maria.

On May 29, researchers from Harvard University and other institutions published the results of an extensive survey that showed anywhere from 793 up to 8,498 people may have died because of the storm and the chaotic aftermath, which included, for many, months without power or medical services. That report prompted activists and academics from Puerto Rico to mobilize around the hashtag #4645boricuas, using one of the numbers in the range that the study cited and the term commonly associated with people from the island.

Days later, people brought more than 1,500 shoes representing victims of the storm to the steps of the Puerto Rican capitol in a silent, public memorial for the unnamed dead.