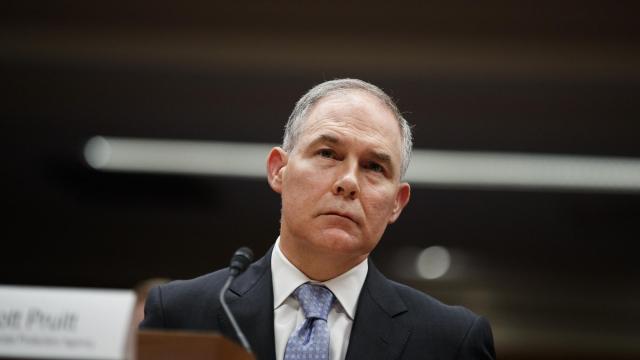 WASHINGTON — The cost of the security services to protect Scott Pruitt, the former head of the Environmental Protection Agency, more than doubled in Pruitt’s first 11 months on the job and the agency failed to justify his requests for protection, according to a report released Tuesday by the EPA’s inspector general.

The cost to taxpayers of protecting the EPA chief grew from $1.6 million spent on security for one of his Obama-era predecessors, Gina McCarthy, to $3.5 million for Pruitt, the inspector general found.

The report concluded that the EPA administrator’s protective service detail, which provides physical protection and escorts to the EPA chief, has no final, approved operating procedures addressing the level of protection required for the administrator.

Pruitt’s security went well beyond that of his predecessors and drew sharp criticism. He received round-the-clock protection, according to documents previously released by the EPA inspector general, from a security detail that ultimately grew to a team of more than 20 people, costing about twice as much as his predecessors Lisa P. Jackson and McCarthy.

Pruitt’s entourage accompanied him on official travel, but the full-time protection also accompanied him on personal trips, including those to his home state of Oklahoma as well as on a family vacation to Disneyland, the Rose Bowl and college basketball games. Those revelations led the EPA inspector general to launch its investigation in April.

The report concluded that Pruitt’s round-the-clock security service led to the unauthorized and improper payment of $106,507 in overtime wages to security agents.

The findings also note that the current acting EPA administrator, Andrew Wheeler, has ended Pruitt’s practice of round-the-clock security protection, returning to the practice of his predecessors of door-to-door protection.

Susan Bodine, the assistant administrator of the EPA, pushed back on several of the report’s findings, calling them “unsupported,” in a letter of response that was included in the report. Among the points she challenged was the finding that the administrator’s security details lack a formal procedure to assess the threats to the administrator.

She also wrote that “a lack of threats” to the administrator “does not mean that there is no risk or that protective services are not justified.”

Pruitt’s critics said the findings illustrate the need for greater oversight of the workings of the Trump administration.

“The inspector general’s report today confirms what we already know: There was no serious evaluation of the so-called threats to former Administrator Scott Pruitt’s personal safety,” said Eric Schaeffer, the executive director of the Environmental Integrity Project, an advocacy group, and the former director of civil enforcement at EPA.

The agency justified Pruitt’s security by saying he faced unparalleled threats from people who disliked his deregulatory agenda. The former administrator also pinned many of the decisions about his level of protection — as well as other decisions, such as purchasing a $43,000 soundproof phone booth and flying first class — on the man who served as the head of his detail, Pasquale Perrotta, commonly known as Nino.

Perrotta, a former Secret Service agent who made a name for himself in the Bronx district attorney’s office building a racketeering case against John A. “Junior” Gotti, the longtime boss of the Gambino crime family, retired in May amid coverage of his role in organizing Pruitt’s security.

Agency officials at the time described Perrotta as encouraging Pruitt’s costliest requests, including armored vehicles and the use of first-class flights to limit the administrator’s exposure to fellow passengers, and pushing aside people who questioned the need for such steps. Three agency officials told The New York Times that Eric Weese, who had previously served as head of the EPA protective detail, was removed and replaced with Perrotta after questioning some of Pruitt’s requests.

Perrotta later came under congressional scrutiny for recommending that Pruitt’s office be swept for surveillance devices by a company owned by a business associate.

The report did not directly address Perrotta’s role in making decisions about Pruitt’s security.

In a telephone interview Tuesday, Perrotta said he agreed with the inspector general’s conclusion that there were no clear processes in place to assess threats against Pruitt. He deflected blame for the security expenditures, saying that the decision to deploy round-the-clock protection for Pruitt was made before he was named to the head of Pruitt’s security detail.

Pruitt’s budget called for 30 security agents to protect him, Perrotta said, adding that Cabinet heads typically are protected by 15 to 20 agents.

“When I received the manpower budget for security, I said, ‘This is too much, it’s too many people,’” Perrotta said in the interview. He added that he relayed his concerns directly to EPA’s Office of Enforcement and Compliance Assurance. “I didn’t make these decisions. I never authorized any of it.”

Ultimately, the EPA inspector general identified 33 threats against Pruitt, a number that was about average for an EPA agency head. Among them were threats made in Twitter messages, emails, postcards and phone calls, as well as one letter from an inmate.

Jean Bloom, one of the investigators who conducted the report, said in a podcast accompanying the audit that the EPA said it used an August 2017 inspector general report to support the increased level of protection. But that report, Bloom said, included only statistical data of threats and didn’t assess the potential dangers presented by them. It also was prepared a full six months after the decision to boost Pruitt’s protection, she said.

The audit also found that the EPA essentially had little way to assess what level of security Pruitt truly needed, or whether the threats his staff said he faced warranted increasing the traditional six-person security team to round-the-clock protection from 19 agents.

Bloom said the decision to have twenty-four hour protection for Pruitt was made before he arrived at the EPA by Trump’s transition team, and keeping that level of protection fell to the administrator’s staff.

Pruitt’s coverage was supposed to have been re-evaluated after his first two weeks in office, with internal EPA agencies conducting analyses of costs as well as threat assessments. The inspector general found that a cost analysis existed, but no threat assessment was found.

“So, the absence of procedures resulted in unclear lines of authority, inconsistent practices, inappropriate or inadequate staffing and excessive or unnecessary costs for the agency,” said Tia Elbaum, a spokeswoman for the inspector general’s office.