Protests to expand despite objections from Republican leaders 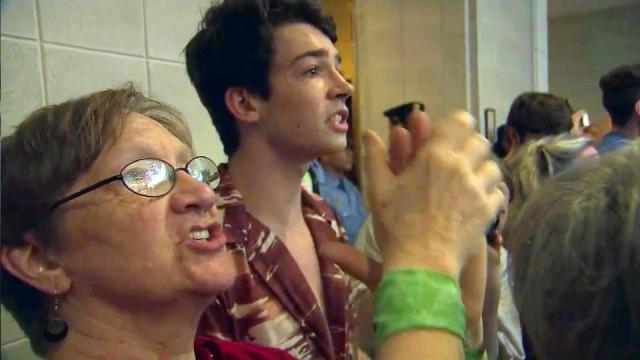 Raleigh, N.C. — Leaders of the "Moral Monday" protests against Republican policies say their weekly events at the General Assembly will continue, despite more than 300 arrests over the past five weeks and condemnation from Gov. Pat McCrory.

McCrory said he did not want to meet with the protesters, who have been organized by the state conference of the NAACP, calling their actions "illegal" and a burden on the courts and law enforcement.

"Maybe it's because he can only defend his policies and the policy of his legislators within the echo chamber of the tea party," said the Rev. William Barber, state NAACP president and the leading figure in the protest movement.

Barber and other leaders of the protests say they are upset with polices put forward by GOP lawmakers, including measures that limit Medicaid expansion, offer publicly funded vouchers for some students to attend private school, impose identification requirements on voters and other major pieces of the Republican legislative agenda.

Barber spoke to reporters on a phone call Friday organized by the Advancement Project, a Washington, D.C.-based civil rights organization.

Barber pledged that Moral Monday would return on June 10 with clergy from around the state leading the latest in a series of demonstrations.

Jimmie Hawkins, pastor of Covenant Presbyterian Church, said he has been working to organize leaders of all faiths to come to Raleigh next week.

"Expect to see a rainbow of colors and faith symbols throughout the mall," Hawkins said.

Barber said that protests would expand next week to encompass a "Witness Wednesday" to mark the 50th anniversary of the assassination of civil rights activist Medgar Evers. Barber said the group will hold the event during the middle of the day, holding up pictures of civil rights leaders who fought for rights he said Republican leaders are trying to strip away.

Republican leaders have said the weekly protests will not change the course of legislation.