Durham, N.C. — Activists called Friday for a moratorium on evictions from Durham's public housing complexes this winter, calling the high rate of evictions a crisis.

"The crisis is disproportionately impacting Durham’s black, working-class communities," said one speaker at a rally outside the Durham Housing Authority offices on Main Street.

Organizers said the rally is in response to the recent approval by local voters of a $95 million affordable housing bond. Much of that money will go to the DHA to renovate complexes and build new affordable housing, but it won't address evictions.

Activists have already collected more than 1,000 signatures on a petition for the moratorium.

"Housing is a human right for all," one protester said at the rally. 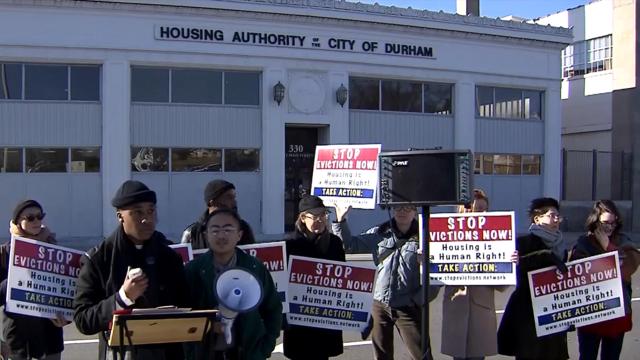 The DHA attempted to evict 40 percent of its households this year – 35 times the rate of evictions in Raleigh.

But Scott, who spoke with some protesters at the rally, said a moratorium on evictions won't solve the problem.

"We're trying to look at what are the root causes of this and how we as a housing authority can assist to the best of our abilities," he said. "We feel strongly that, by just simply doing a moratorium with no real plan in place, is more likely going to lead to people being in more debt."

The DHA changed its policies in August to notify residents who are late on their rent that the should communicate with the agency and with the Department of Social Services to seek help.

Rafiq Zaidi lives at the J.J. Henderson housing complex on South Duke Street and said he knows a lot of people who have been sent eviction notices. He used to be homeless, and he said the potential for anyone possibly having to live on the streets is traumatic.

"The threat of being sent back to the conditions that you came out of, it’s a psychological threat," Zaidi said.

"We’re not interested in evicting a family that is unable to pay their rent," Scott said. "We are willing to work with a family. We can do a payment plan, all kinds of things, to prevent us from filing that eviction notice."