Raleigh, N.C. — A rally across from the North Carolina Legislative Building ended Monday afternoon with nearly 50 demonstrators being cited by police for protesting in the middle of the street.

Nearly 200 people gathered in Raleigh to participate in the Poor People's Campaign, a national effort involving 30 other locations that calls for six weeks of nonviolent direct action. The gathering focused on the needs of women, people with disabilities, children living in poverty and LGBT community members.

Activists filed out into the middle of Jones Street where the General Assembly meets, holding hands and refusing to leave until each was led away by officers for a citation. Police Capt. M.K. Kohr says 49 people were cited for impeding traffic by standing in the street. Police shut down one block. 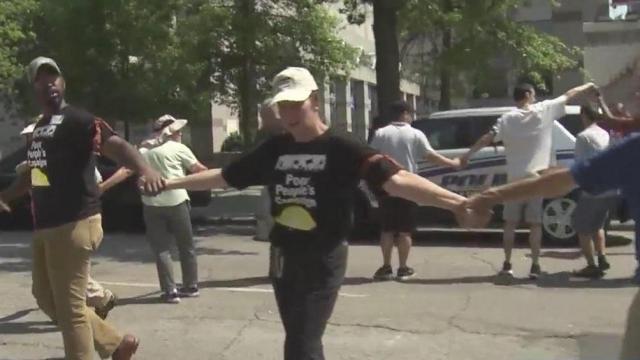 The participants listened to several speakers before beginning what they called their first day of action, which included calling for an overhaul of the nation's voting rights laws. The participants also demanded a change in the policies that address poverty, ecological devastation, war and the economy.

"We have to bring this to light and call people's attention to the fact that our elected officials continue to create laws and policies that deeply affect the already disadvantaged in our community," said the Rev. Nancy Petty, one of the local event organizers.