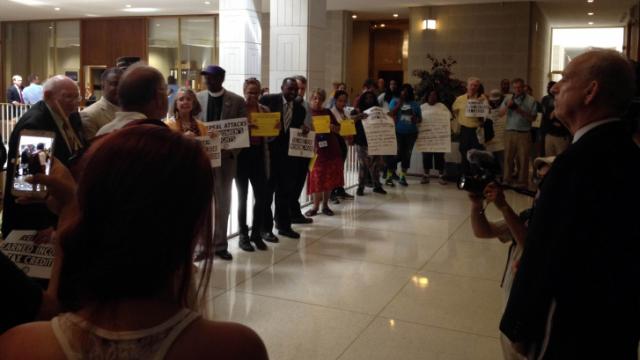 Raleigh, N.C. — The state chapter of the NAACP and other protesters are seeking to overturn rules that limit demonstrations at the Legislative Building.

The group filed suit Wednesday seeking a restraining order that would prevent the General Assembly Police from enforcing rules that prohibit groups from making enough noise to interfere with conversation and allow officers to order people to leave the building if they think those people pose an "imminent threat" of a disturbance.

The NAACP noted in a Thursday news release that lawmakers didn't define what constitutes a "disturbance" or an "imminent threat" when they hastily rewrote the rules for public access to the Legislative Building rules in May before the "Moral Monday" demonstrations resumed for a second year.

Last summer, more than 900 people were arrested during the weekly protests of Republican policies such as cutting unemployment benefits and changing elections laws. They were charged with trespassing and violating the Legislative Building rules. Some have since been convicted, others acquitted, while some cases were dismissed as part of a deal with Wake County prosecutors and others are still awaiting trial.

The NAACP and protesters Douglas and Vicki Ryder, Stella Adams, Sylvia Barnes and O'Linda Gillis contend that the revised building rules are vague and violate both the U.S. and North Carolina constitutions.

Senate President Pro Tem Phil Berger said Thursday that the updated rules were what allowed him to meet for a hour Monday night with a group of protesters to discuss education issues.

“For years, we’ve heard feedback that the 30-year-old building rules implemented by previous Democrat leaders were confusing and restrictive,” Berger said in a statement. “We responded to those concerns, and I am baffled why (state NAACP President) Rev. Barber is now trying to turn back the progress we made in increasing building access and free speech.”

Berger noted that the rules now allow handheld signs with political messages and permit people on the second floor of the building, where his office is located.