A group of protesters waving Confederate flags and shouting "Trump 2020" gathered outside a polling site in Chatham County on Saturday morning.

Early voting had already begun at the polling site, while protesters shouted slurs and waved signs. 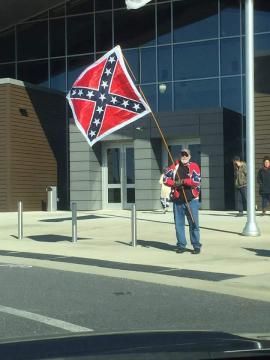 The group gathered to protest an event at the Chatham County Agriculture & Conference Center, where Chatham For All and Abundance NC invited the public to listen to four national scholars for a panel discussion called "The Civil War Today."

The event was an educational talk meant to offer historical perspectives on Confederate monuments. 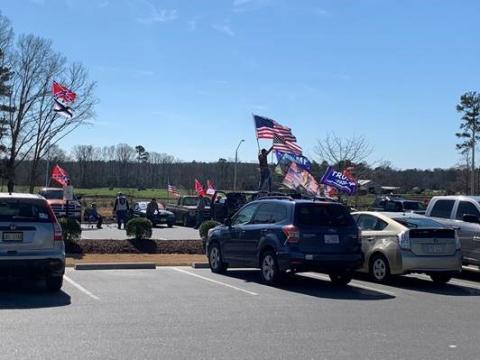 According to the Chatham For All event description, they hoped to have open public discussion about the ongoing controversy over the removal of Confederate monuments and symbols that they said were causing a stir by challenging family histories, estranging neighbors and distressing businesses and communities. 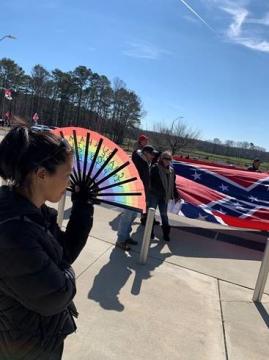 Four national scholars from UNC and Duke were there to "discuss the truths and fallacies of the Civil War and confederate symbolism today."

Twitter videos from one attendee showed protesters angrily shouting slurs at the crowd who gathered for the educational panel.

The event began Saturday at 10:30 a.m., according to their event page.

The attendance of protesters seemed to indicate just how controversial the removal of the monuments is, and to what extent disagreements about the monuments is impacting, and dividing, the community.

The protesting raised concerns about whether or not protesters should be allowed to gather near a polling site, particularly during early voting. However, an official explained, "The temporary polling center utilized a separate entrance and parking lot than attendees of the Civil War event."

According to officials, signage and other markers were in place to direct voters to the appropriate entrance.