Lawmakers will not get to interview whistleblower in person, attorneys say 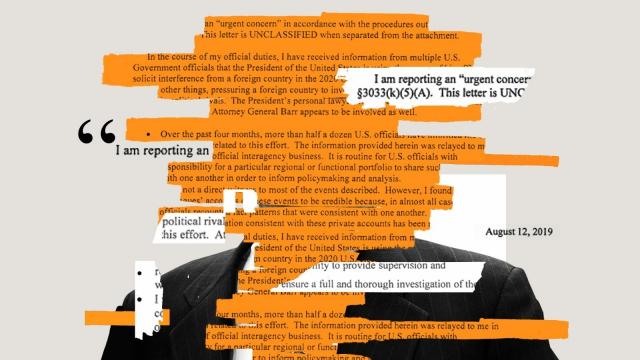 CNN — Prospects are growing increasingly grim that congressional investigators will have the opportunity to interview the anonymous whistleblower whose complaint sparked an impeachment inquiry into President Donald Trump over allegations he abused his office in his dealings with Ukraine.

The attorneys for the whistleblower who lodged a complaint with the intelligence community inspector general related to Trump's July 25 phone call with Ukraine's President wrote in a Washington Post op-ed Friday that there is no need for their client to testify in person, even behind closed doors.

On Thursday, the lawyers had released an October 8 letter to leaders of the Senate Intelligence Committee in which they say an in-person meeting with committee staff is a "non-starter," citing the need to protect the whistleblower's safety.

"Additionally, it is our firm position that we must treat Congress as a whole in a fair and impartial manner. Thus, given the events of just the past 24 hours, let alone the past three weeks -- to include threats from the President of the United States -- our client is now only willing to communicate with both Committees through written interrogatories," the letter states.

"Frankly, based on White House action and other witness testimony, the vast majority of the substantive allegations set forth in our client's complaint have already been verified, thus minimizing the utility of any information our client could provide at this stage," it adds.

Committee Chairman Richard Burr said last week that he was trying to get access to the whistleblower but "they haven't agreed to" make the person available. Asked why, the North Carolina Republican said, "No idea" but "they're not interested," appearing to refer to the individual's legal counsel.

On the House side, top Republicans on the committees involved in the impeachment inquiry have demanded that Intelligence Chairman Adam Schiff of California bring the whistleblower in for public testimony.

However, Schiff and other Democrats have increasingly signaled that an interview with the whistleblower is unnecessary, arguing that they have spoken to a number of witnesses who have corroborated key elements of the individual's account, which is mostly based on secondhand information.

They fear that growing attacks by Trump and Republicans have compromised the safety of the whistleblower, worrying that allowing the individual to testify -- even in private -- could lead critics to leak his or her identity to the press.

Negotiations have taken place for weeks between Schiff's staff and the whistleblower's attorneys, but the Democrats have increasingly focused instead on obtaining testimony from current and former administration officials who could corroborate key elements of the whistleblower's complaint that Trump had used his office to encourage a foreign power to interfere in the 2020 elections.

After initially suggesting that extreme measures could be taken to protect the whistleblower's anonymity, such as masking his or her identity or conducting the interview off-site, the whistleblower's attorneys have suggested instead allowing their client to answer written questions from the committee.