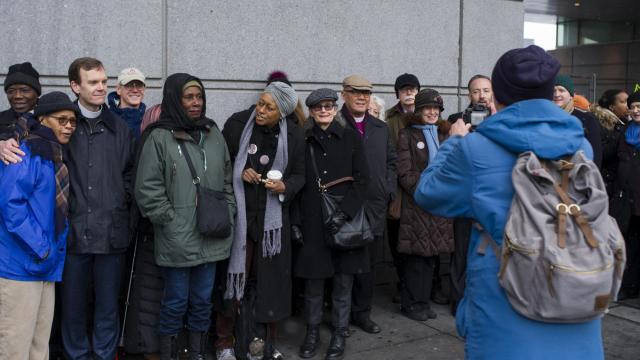 NEW YORK — A New York City police sergeant who killed a mentally ill woman wielding a baseball bat ignored his training to isolate her and instead rushed to take her down, provoking the confrontation that led to her death, a prosecutor told a judge Tuesday at the opening of the officer’s trial on murder and manslaughter charges

In a Bronx courtroom packed with police officers and parishioners from the woman’s church, the prosecutor, Newton Mendys, said that four police officers had already talked the woman, Deborah Danner, into putting down a pair of scissors and were trying to coax her out of her apartment, when the sergeant, Hugh Barry, arrived and took charge.

“He made a bad situation worse,” Mendys said. “He created a situation that was rushed, hurried, careless, reckless, chaotic and ultimately tragic.”

Within minutes of arriving, Barry led the other officers in a failed attempt to tackle Danner, who was 66, overweight and in the grip of a psychotic episode. Danner retreated into her bedroom and grabbed a baseball bat, Mendys said. Barry drew his gun and ordered her to drop it. As she shifted her weight to swing it, he shot her twice, the prosecutor said.

Mendys told the court said the case will boil down to whether Barry, 32, honestly believed that Danner was about to strike him with enough force to kill him. He said the evidence would show the sergeant had overreacted. “Some would have you believe that a bat by itself automatically is deadly physical force,” he said. “We do not agree with that.”

But the sergeant’s lawyer, Andrew C. Quinn, said a 233-pound woman like Danner could easily swing a bat with enough force to crush someone’s skull. He said Barry had made the decision to try to tackle Danner to keep her from rearming herself with the scissors.

Then she picked up the baseball bat and started to swing it from 4 feet away, he said. Barry could not back up because of the officers behind him.

“Deborah Danner died because she swung a lethal weapon — a bat — at the head of Sgt. Hugh Barry, and no other reason,” Quinn said.

He said it mattered little whether the sergeant had followed his training or the patrol guide; he still acted in self-defense the moment he fired the weapon.

“The Bronx district attorney’s office is blaming Sgt. Barry for Deborah Danner’s decision to arm herself with a weapon and swing it at his head,” Quinn said.

Danner was killed at about 6:30 p.m. on Oct. 18, 2016, inside her cluttered seventh-floor apartment at 630 Pugsley Ave. in the Castle Hill section of the Bronx. The police and two emergency medical technicians had been called by a building security guard to persuade her to go to a hospital. Earlier, she had been ranting loudly in the hallway.

Her death came amid a national debate over police shootings and prompted protests in New York, led by elected leaders.

Barry was charged with murder, manslaughter, involuntary manslaughter and criminally negligent homicide. He has waived his right to a jury, putting the case in the hands of Justice Robert A. Neary of state Supreme Court.

Prosecutors left little doubt they intended to build a case that Danner would be alive had Barry followed the Police Department’s protocols. Mendys said the prosecution would call police experts as witnesses to describe how Barry should have contained Danner in a safe place and patiently listened to her complaints, trying to ratchet down the tension, until specially trained officers from the Emergency Service Unit could arrive.

Later Tuesday, Danner’s sister, Jennifer Danner, took the stand to describe how she had hurried to her sister’s apartment when she was informed the police had been called. It was the third time in the previous two years that the police had been summoned to help transport Danner to a hospital, she said.

Jennifer Danner, who had recently been appointed her sister’s legal guardian, said she rode the elevator to the seventh floor with Barry and his driver. She said Barry did not ask her anything about her sister’s condition or illness. Nor did he ask her to speak to her sister.

She said she waited by the elevator while Barry walked down the hallway to her sister’s apartment. Two medics and about four police officers were gathered at the doorway. She said her sister was yelling: “Get out! Get away from my door! Leave me alone!”

She said she heard a male voice saying, “Drop the scissors.” A few seconds later, the police in the hallway rushed into the apartment and she heard gunshots, she said. Under cross-examination, Jennifer Danner said that she had been quarreling with her sister for months and had not been inside her apartment for a year. Deborah was angry, she said, that a judge in August 2016 had made Jennifer the legal guardian.

Jennifer Danner also testified that her sister had never threatened an officer with a weapon before the night she was killed.

As testimony ended for the day, dozens of police sergeants, dressed in suits with union lapel pins, mixed with parishioners from an Episcopal church Danner attended as they flooded out of the courthouse together. “She was part of our community,” said Matthew Heyd, the rector at Church of the Heavenly Rest. “She was part of us.”

Outside the courthouse, the president of the Sergeants Benevolent Association, Ed Mullins, who has called charges against Barry baseless and politically motivated, said the trial “had a chilling effect” on police across the country.

Moments after he finished, Hawk Newsome, the president of Black Lives Matter New York, stepped up to the microphones. He said Barry was “symbolic of all that is wrong with policing in America.”

“This man is not a hero,” Newsome said. “This man murdered a mentally ill senior citizen. We expect justice for her.”