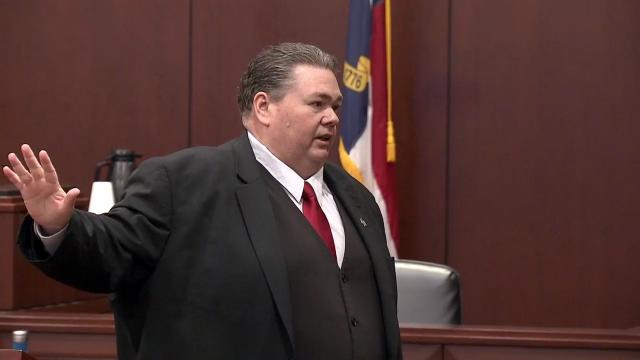 Raleigh, N.C. — After seven days of sometimes pointed, sometimes tedious testimony, prosecutors on Tuesday completed their case against a former district attorney accused of providing a no-show job for a colleague's wife.

Wallace Bradsher, who resigned a year ago as district attorney of Person and Caswell counties, must decide whether to take the stand in his own defense on Wednesday.

Bradsher faces charges of felony conspiracy, obtaining property by false pretense, aiding and abetting obstruction of justice and failure to discharge his duties.

Craig Blitzer, who resigned last year as Rockingham County district attorney, testified last week, that he and Bradsher agreed in early 2015 to hire each other's wives to get around state ethics rules against prosecutors hiring spouses. He said Bradsher allowed Cindy Blitzer to attend nursing school and handle family errands, such as taking her son to school and picking him up, while continuing to record hours.

Cindy Blitzer said she wanted to do work for Bradsher and kept asking for more to do after a child homicide case was taken away from her, but her requests were ignored. She said Bradsher was aware that she was getting paid without doing any work.

Bradsher, who is representing himself in the case, has tried to demonstrate through cross-examination of various prosecution witnesses that he didn't directly supervise Cindy Blitzer and didn't realize she wasn't actually doing any work.

On Tuesday, Jay Stultz, a former assistant district attorney in Bradsher's office, said that he supervised Cindy Blitzer until early 2016, when Bradsher assumed responsibility for assigning her projects and approving her hours in the state payroll system.

The Blitzers testified that Bradsher tried to cover up the no-show job when the State Bureau of Investigation began looking into Cindy Blitzer's work by having her tell investigators she was working on special projects for him.

Stultz said he was unfamiliar with any project work that she might have been assigned.

Craig Blitzer pleaded guilty to failure to discharge the duties of his office and is awaiting sentencing. As part of his plea deal, he paid back the $48,000 investigators determined his wife was improperly paid.

The SBI determined that Pam Bradsher actually did the work for which she was paid.

Superior Court Judge Paul Ridgeway said that, if Wallace Bradsher testifies, he cannot simply deliver a monologue from the witness stand and must pose questions to himself to give prosecutors a chance to object to potential testimony.