Wake Forest, N.C. — Environmentalists on Tuesday urged the Raleigh City Council to reject a proposal to build an apartment complex on Louisburg Road, saying it would adversely impact the nearby Horseshoe Farm Nature Preserve and the Neuse River.

Buckingham Companies wants to get the 41-acre site just south of Mitchell Mill and Ligon Mill roads rezoned to allow a complex of four-story buildings and up to 375 units.

"The impact from a development as they are proposing and asking for is going to create a big negative impact on this park and the wildlife," said Lena Gallitano, who helped create the 146-acre Horseshoe Farm preserve 15 years ago by pushing against a plan to convert the site into sports fields.

The preserve, which sits on a bend in the Neuse River, remains primarily undeveloped pastures and woodlands.

"We have 147 species listed that have been seen in this park," Gallitano said. "It’s a beautiful park, and it’s unlike anything in Raleigh. You cannot go anywhere in Raleigh that I know of where you can really enjoy nature [like] that. I can stand up here and look, and I see no buildings."

The Wake Audubon Society and the Sierra Club are leading the current fight against nearby development. More than 800 people have signed an online petition demanding that the City Council reject the rezoning and protect the preserve, and 58 of 62 people expected to speak at a public hearing on the issue Tuesday night were opposed to the rezoning. 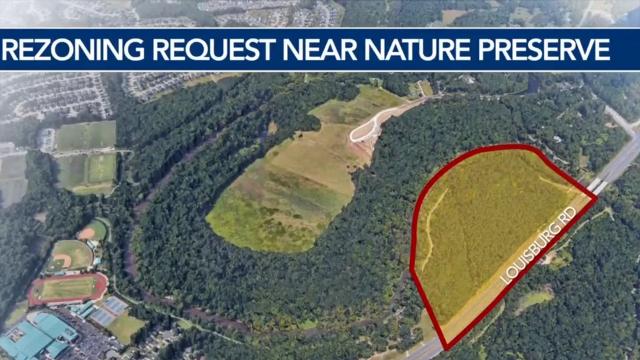 "I’m worried about what it will do long term to this park and the wildlife who now use it and enjoy it," Gallitano said. "It puts this at risk now with this proposal and potentially two or three other adjoining lots along the river, which would be even more impactful to Horseshoe."

Buckingham officials issued a statement to WRAL News dismissing many of the claims put forward by environmental groups about the proposed project.

"The buildings will not be visible from the open space areas in the park, given the distance between the two and the existing dense forest separating them," the statement continues.

Gallitano said she recognizes the need for more affordable housing in Raleigh, but she said the proposed complex wouldn't provide that and also would break a trust to preserve the serenity of the preserve.

"We need housing. We do not need it to impact a nature preserve," she said. "We’re not caring for what we have invested in."