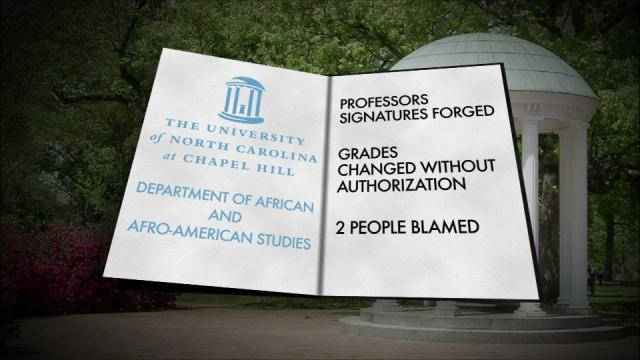 A recently released report highlighting the findings of an internal investigation into the African and Afro-American Studies program at the University of North Carolina at Chapel Hill has triggered strong reaction from faculty and students around the campus.

The nine-month review, prompted by the academic scandal involving former players on the UNC football team, found widespread misconduct, teaching irregularities, grade changing and even forged signatures within the African and Afro-American Studies department from summer 2007 through the 2009 school year. It places the blame for the improprieties on just two people – former department chair Julius Nyang’oro and his now retired assistant Debbie Crowder.

But some on the faculty believe that it is another example of problems in the system.

”I was sickened by it as I think most faculty around the campus were,” said history professor Jay Smith.

“There is this sense that the institutional integrity of UNC is being eroded over time.”

Smith is quick to point out that these specific concerns can be narrowed to a select couple faculty members. "One of the most disturbing things of this whole sordid affair is that that department has been unforuntately unfairly sullied by this entire story," Smith said. "We know that most of the people, virtually all of the people in that department, are good scholars, good teachers, very responsible citizens.”

But he worries that the problems could go beyond the report.

“We had all this news about a rogue tutor,” Smith explained. “There was a rogue assistant coach, a rogue agent, now, a rogue faculty member and a rogue administrative assistant. That's a lot of rogues."

More than half of the students enrolled in the classes in question were athletes, according to Nancy Davis, associate vice chancellor for university relations. 246 of them were football players (36 percent of enrollments); 23 were basketball players (3 percent); and 131 (19 percent) were students who competed in Olympic sports.

Davis pointed out that of the 616 courses offered by the department between summer 2007 and summer 2011, only 54 were in question.

Head basketball coach Roy Williams insisted that the basketball players who took the courses accountable, and did all the work they had been assigned. Director of Athletics Bubba Cunningham said the review will strengthen academic experiences.

Smith said he wants a review of how athletics and academics intersect – from recruiting to graduation.

"I think it's time we confronted the fact that misbehavior by a handful of individuals is in fact a symptom of a dysfunctional system," Smith said.

Law professor Lissa Broome, the faculty athletics representative, has been involved in several reviews since the NCAA investigation started and said that the situation has been addressed.

"I think that we have looked under, looked in lots of nooks and crannies to try and make the program stronger,” Broome said. “I would be surprised if there if there is anything else lurking out there."

Broome said there are a lot of aspects people may not realize in which academics are prioritized – even in recruiting.

"But based on all this we have gone through, we are constantly trying to improve and make sure that there aren't any unpleasant surprises in the future," Broome said.

As for the other campuses in the university’s system, UNC System President Tom Ross says there is no evidence this is a widespread problem. He does, however, plan to speak with each chancellor and chief academic officer about these issues. The report will likely be discussed in the Board of Governors meeting next month.