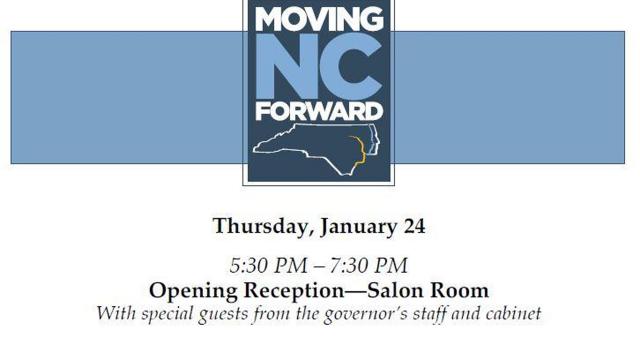 Raleigh, N.C. — More than a dozen top-ranking officials from Gov. Roy Cooper's administration will be on hand Thursday night for a reception with political donors as a dark money group that supports the governor's priorities gathers for its winter meeting.

An email obtained by WRAL News lists no fewer than 15 key officials expected at an opening reception at the posh Umstead Hotel in Cary. That includes Cooper's chief of staff, two deputy chiefs of staff, Cooper's senior adviser, his general counsel, four cabinet secretaries, two deputy secretaries, the head of the Division of Motor Vehicles and the chairman of the state Board of Transportation.

Moving NC Forward is a 501(c)(4), named for the section of the U.S. tax code it operates under. These "social welfare" groups can take unlimited donations from anonymous donors. They can't be solely political but can spend about half of what they raise on political causes.

The invitation doesn't list suggested donation amounts, but past invitations have put them between $10,000 and $100,000.

The group ostensibly advocates not for Cooper, but for public policies that align with his agenda. It's populated by prominent Democrats, and Kate Connelly, Cooper's finance director during his 2016 gubernatorial run, is typically listed as the RSVP contact for group events.

Cooper's spokesman has said in the past that the governor participates in Moving NC Forward events, but he doesn't fundraise for the group.

"Administration leaders and staff are frequently invited to attend and participate in policy discussions," spokesman Ford Porter said in an email Wednesday.

Though maligned by watchdogs that favor campaign finance reforms, these groups are not unusual in modern politics. Former Gov. Pat McCrory's supporters formed one during his term.

"It's unfortunate that this is the way the game is played, where we have these organizations that both sides utilize to provide access," Phillips said. "It continues to create the perception with the public that the access and influence comes with a price tag."

Separately, in a sign that the 2020 campaign season is not far away, Cooper's gubernatorial campaign plans a fundraiser breakfast Tuesday. Invitations for that event, at a downtown Raleigh hotel, list top donation levels at $5,400, the new maximum this year that donors can give a single candidate per election.

The increase from $5,200 is based on inflation, something the General Assembly wrote into North Carolina law in recent years.