Fayetteville, N.C. — It has been several years since guests spent the night at the Prince Charles Hotel in Fayetteville, but the building's long-awaited metamorphosis to high-end apartments is nearly complete.

Developers said residents should start moving in on May 1, capping a multi-year effort to renovate the building, which is about 30 percent leased so far.

Many of the apartments in the building, located at 450 Hay Street, have sweeping views of Segra Stadium, home to the Fayetteville Woodpeckers, a Houston Astros affiliate.

Lavern Oxendine has been looking forward to moving into his new apartment at the Prince Charles Hotel for some time. He said he has lived in Fayetteville for 10 years and says there are several reasons to live downtown.

"From here, you can park your car on the weekend and not even see it until Monday morning," he said. "And on the weekend, you can walk to the movie theater."

During a tour of the building Wednesday, visitors saw that there's still a bit of work to be done.

But the seventh floor is complete, with carpet running down the hallway and appliances are in place inside the apartments. 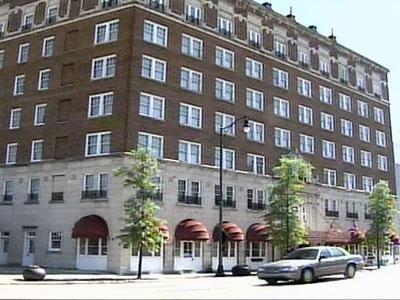 Oxendine could have chosen to live any place he wanted, but he said he chose to live in downtown Fayetteville for a reason.

"This is the heart of Fayetteville," he said. "It's the heart of Cumberland County, and we all want our downtown to continue to prosper."

No one knows that better than Jordan Jones.

His great-great-grandfather helped build the hotel that opened in 1925. A group of investors led by Jones have pumped in more than $18 million to fix up the once majestic hotel.

"There used to be 110 hotel rooms inside the Prince Charles, and we basically took two hotel rooms to combine them into one larger apartment," Jones said, adding that one- bedroom apartments in the building have about 600 square feet and start at about $1,000 per month.

"It's magnificent," he said. "And the view is definitely worth it."