Presidential dining delights in the City of Light 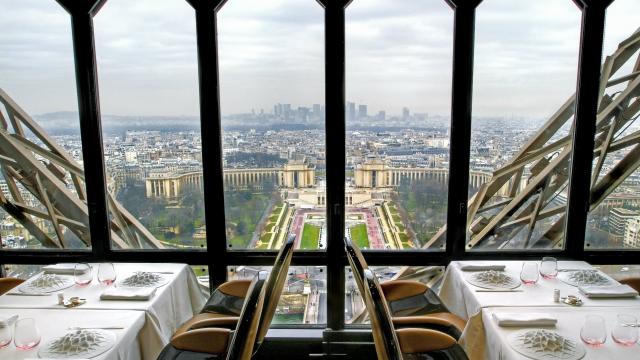 In their first presidential visits to the City of Light, President Donald Trump and President Barack Obama held similar agendas: bilateral meetings with French leaders, quick tours of tourist sights and a mandatory stop to enjoy legendary French cuisine. But like the bistros, brasseries and haute cuisine temples that pepper this city, no US leader is quite alike.

When Obama arrived for the first time as president in 2009, his destination was a homey bistro on a Parisian side street -- all warm light, red-and-white tablecloths, and the constant din of clinking glasses and potatoes being thrust into hot oil.

If Obama's choice was down-to-earth (albeit touristy), Trump's selection this week is decidedly not -- literally. The leather-and-glass encased dining room of Le Jules Verne, where he'll dine Thursday, is perched 400 feet off the ground, wedged into the wrought iron girders of the Eiffel Tower.

On a recent weekday ahead of Trump's arrival, there were few signs of the impending VIP guest at Le Jules Verne. Instead, the Michelin-starred eatery was operating at its normal hum. Jacketed waiters whisked between tables as a fully booked lunch service got underway.

Patrons at the establishment are able to skip the epic midsummer lines to the Eiffel Tower's elevators, instead ducking into a private entrance with a designated lift to sweep diners skyward toward the restaurant.

Once upstairs, dark leather banquettes and gray tablecloths offset panoramic views of the marble-and-stone city that extends below.

For Trump, the elevation may provide a homesick New Yorker a reminder of his old aerie in Manhattan. He hasn't returned to his triplex apartment on the 66th floor of Trump Tower since taking office.

If the setting provides comfort, however, the cuisine may not. Trump is known to enjoy American classics: meatloaf, fried chicken and steak -- very well done -- served with ketchup.

None appeared on the six-course tasting menu on offer this week and the only available accoutrement: a tiny dish of sea salt, set with its own tiny spoon.

Lunch began with marinated sea bream, laid delicately into a glass bowl atop ribbons of zucchini. Forty minutes later, the next course arrived: three round potatoes shipped in from the island of Noirmoutier, off France's Atlantic coast, coated in smoked cream, gold caviar and herring. A tiny potato chip was balanced on each.

Four more courses came through, each as leisurely paced as the next. All told, a lunch that began around noon extended well past 3 p.m. -- a relaxed outing even by French standards.

A stone's throw away sits a different kind of Parisian dining room -- La Fontaine de Mars, a bustling bistro marked by a red-and-white striped awning on a hidden cobblestone road.

While the bistro -- one of Paris' oldest, dating back to 1908 -- exemplifies the quintessential French dining experience, one things sets it apart: a framed sign above the kitchen which announces in French that Obama once ate here.

Obama chose the restaurant on his first trip to Paris as president in 2009. He was joined by his wife Michelle Obama, and they left behind their daughters Sasha and Malia, who were also on the trip.

Walking into the bistro eight years after Obama once did as president, it's hard to imagine much has changed. Guests are greeted by a buzzing and friendly waitstaff before being squeezed into cozy red leather booths and wooden chairs, marked by checkered table cloths and tiled floors.

According to an employee there that night, the Obamas dined on the secluded second floor of the restaurant, and enjoyed one of the bistro's specialties, steak frites, and a popular weekly special, the roasted baby lamb served with potatoes au gratin.

The Obamas, who arrived at 9 p.m. and stayed for about two hours, called it a night after indulging in the sinfully delicious chocolate mousse for dessert.

During Obama's 2009 visit, he also took time to visit the Notre Dame cathedral and the architecturally incongruous Pompidou Center, a modern art complex in the 4th arrondissement, with his wife and children.

Even with those brief asides from bilateral talks and news conferences, however, Obama waxed poetic about what a visit to the City of Light might mean if he wasn't surrounded by hundreds of security personnel, aides and a traveling press corps.

"I would love nothing more than to have a leisurely week in Paris, stroll down the Seine, take my wife out to a nice meal, have a picnic in Luxembourg Gardens," he said to laughter alongside his counterpart, Nicolas Sarkozy. "Those days are over, for the moment."

For Trump, dinner out in Paris is as much business as pleasure. He and first lady Melania Trump will be joined by French President Emmanuel Macron and his wife, Brigitte, the first time all four have met together.

Speaking Thursday, Trump appeared excited to scale the Eiffel Tower for dinner with his French counterpart.

"That'll be something special," he said during a news conference.

A former White House official told CNN there was no standard protocol in picking a restaurant for the former president to dine at while traveling, adding that recommendations were never in short supply from staff, diplomats and other officials who had lived or spent time in the area.

Once a restaurant was picked, White House staff and Secret Service personnel would scout the location for any security issues or other problems that would arise, the official said.

As President, Trump has eaten out occasionally at the hotel he owns in Washington. He's also taken meals at his private clubs in Palm Beach, Florida, and Bedminster, New Jersey. But he hasn't ventured to any of Washington's well-known restaurants, nor has he returned to his preferred spots in New York.

But if there was ever a locale worth stepping out in, Paris is the place.

Speaking ahead of Trump's visit, a senior administration official said Trump is eagerly anticipating the time he'll spend with Macron and his wife.

"I think he's very excited," the official said. "The first lady is very excited. Any time that you can go visit a couple like the Macrons in the City of Light, it's pretty tremendous."