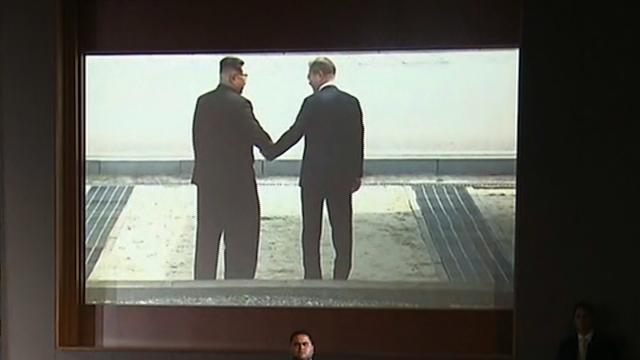 "Two leaders, one destiny: A story about a special moment in time, when a man is presented with one chance that may never be repeated," the voiceover in the video says. "What will he choose? To show vision and leadership? Or not."

Trump showed the video, which was made by the National Security Council, publicly during a news conference with reporters on Tuesday.

"The video was created by the NSC to help the President demonstrate the benefits of complete denuclearization, and a vision of a peaceful and prosperous Korean Peninsula," Garrett Marquis, a NSC spokesman, said in a statement.

The video, which is about five minutes and in a movie-trailer format, begins with shots of people walking across the globe.

"Seven billion people inhabit planet Earth," the voiceover says. "Of those alive today, only a small number will leave a lasting impact. And only the very few will make decisions or take actions that renew their homeland and change the course of history."

It then cuts to images of Trump and Kim.

"The past doesn't have to be the future," the video says. "Out of the darkness can come the light and the light of hope can burn bright. What if, a people that share a common and rich heritage, can find a common future? Their story is well known but what will be their sequel?"

The video calls the narrative "a story of opportunity, a new story, a new beginning, one of peace." It is credited to "Destiny Pictures." However, Mark Castaldo, the founder of Los Angeles-based production company Destiny Pictures, told CNN in a phone interview that his company "had nothing to do with the video."

Trump said they had "it on a cassette and an iPad. And they played it. And about eight of their representatives were watching it, and I thought they were fascinated."

The meeting between the two leaders came only months after the two men traded nuclear taunts, ratcheting up tensions and leading to fears of war.

Trump and Kim -- both intent on making history by meeting -- greeted each other early in the day with extended hands in front of a row of US and North Korean flags, a previously unthinkable sight that reflects a new chapter in the two countries' acrimonious relationship.

Trump told reporters in Singapore that he would "absolutely" extend an invitation to the White House to Kim, who also heralded a new era.

"Today, we had a historic meeting and decided to leave the past behind," Kim said through a translator. "The world will see a major change."

The document he and Kim signed said the North Korean leader "reaffirmed his firm and unwavering commitment to complete denuclearization of the Korean Peninsula." In exchange, Trump agreed to "provide security guarantees" to North Korea.