President Trump Had a Lot to Say on Thursday. But Not About John McCain. 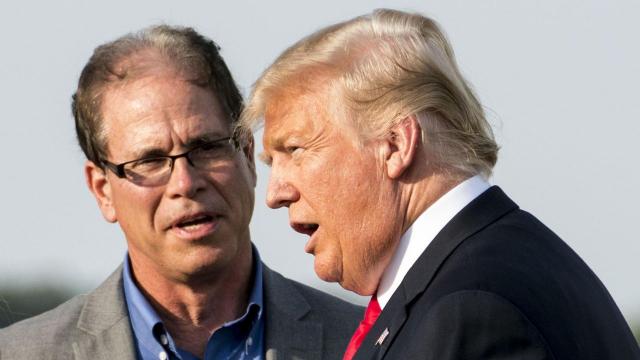 EVANSVILLE, Ind. — As Sen. John McCain’s coffin was being loaded onto a military plane bound for Washington on Thursday afternoon, cameras from major American TV networks beamed the coverage around the world, allowing a rapt public to witness the next leg of his four-day funeral.

Back at the White House, President Donald Trump aggressively tried to wrestle back the attention.

“Throwback Thursday!” the president exclaimed on Twitter, posting a video of celebratory Fox News clips of his unlikely route to the presidency just as McCain’s coffin was heading for Washington, where it will lie in state in the U.S. Capitol on Friday.

As the day unfolded, Trump’s behavior continued to offer a split-screen effect that has persisted since McCain died at 81 from brain cancer on Saturday. This week, Trump has once again made clear that his usual media blitzing does not slow for anyone, and he has barreled forward to showcase the new and politically tribal reality he has promised his supporters.

Conspicuously absent from the president was any acknowledgment that a nation was remembering the contributions of McCain, a Republican war hero and two-time presidential candidate. Clues to how Trump might feel about having the attention diverted from him lay not in what he said — and on Thursday, he certainly had a lot to say — but in what he did not.

Earlier in the day, as former Vice President Joe Biden gave an emotional eulogy to McCain in Arizona, Trump, who months ago had been excluded from any of McCain’s memorial ceremonies, tweeted about witch hunts and fake news. He sat for an interview with Bloomberg, in which he dangled the prospect of keeping Attorney General Jeff Sessions, an early believer turned political piñata, in his job until November.

“I just would love to have him do a great job,” the president said.

In the interview, he was defiant about how he handled the senator’s death: “No, I don’t think I have at all,” Trump said when asked whether he had missed a chance to unite the country.

“I’ve done everything that they requested,” he said, referring to his decision to let McCain’s family have the military transport the senator’s remains from Arizona to Washington, and to have service members as pallbearers at his funeral. Trump also appeared to mock Sarah Huckabee Sanders, his press secretary and one of the aides who pushed him to issue an official response to McCain’s death days earlier than he did.

When he declined to indicate whether McCain would have made a better president than Barack Obama, Trump dangled his lack of response over Sanders, saying that she must be “having a nervous breakdown.”

As he nursed his perceived wounds, Trump dispatched Vice President Mike Pence to Minnesota to smooth over any tension with members of the American Legion, a wartime veterans service organization. That group expressed alarm at Trump’s decision to return the White House flag to full staff two days after McCain’s death, and was said to have been a factor in the decision to lower the flag back down through McCain’s interment.

Pence told attendees at the group’s national convention that “America will always remember and honor the lifetime of service of United States Senator John McCain.”

After the attack-and-court-Washington-news-media portion of his day, Trump flew to this town in southern Indiana to attend one of his beloved political rallies, where he stumped for Mike Braun, a former state representative running for Senate. Braun will challenge Sen. Joe Donnelly, one of the most vulnerable incumbents in the chamber, and Braun spent most of his time at the rally lavishing praise on the president.

Since the campaign, the rallies have offered Trump instant gratification, reassurance and, perhaps most important, an opportunity to wrest back control of a narrative he has felt strayed too far away from him. He was particularly happy to get to Evansville this week, several people close to the president said. They said Trump, an avid follower of news headlines, was behaving as if he had been cornered, and was lashing out at the negative coverage of his administration.

By the time Trump opened the rally, he made it clear his mood had changed from defiant to rally-energized, delivering classic red-meat fare for his supporters. The event followed the usual recipe:

First, the president identified the city he was visiting. He thanked the “special” people of Evansville and Indiana, who greeted him with a “USA” chant.

Trump then added his economic accomplishments to the mix. This time, he expressed optimism for a revised trade deal with Canada, skimming over the trade talks with Mexico — a country he often jeers at these events — that took place this week.

“It could happen,” Trump said of the negotiations. “We’ll see what happens. If it doesn’t happen, we’ll put tariffs on the cars coming in from Canada and it’ll be even better.”

Then, Trump paused as the crowd booed a protester. “Where the hell did she come from?” he asked. After the demonstrator was ejected, Trump pulled out his most reliable heels: journalists and Democrats. He started a screed about the news media, which he castigated for reporting, among other pieces he found unflattering, that he was concerned that a rally in West Virginia last week was less enthusiastic than usual. He spent several minutes complaining that the coverage of a rally did not sufficiently capture the enthusiasm of his supporters, and repeatedly returned to the topic.

The president reserved some ire for Donnelly and the usual conga line of Democratic targets including New York Sen. Chuck Schumer, California Reps. Nancy Pelosi and Maxine Waters, and Hillary Clinton — “Lock her up!” the crowd chanted. The Democratic Party, he added, had been taken captive by “deep state radicals” and “fake news allies.”

Donnelly, for his part, did not take the bait. “I was unable to watch President Trump’s rally tonight, as I was headed back to Washington for Senator McCain’s memorial services,” he said in a pointed statement.

Trump — who at one point told the audience, “Our veterans are the greatest” — made no mention of McCain. The crowd did not seem to mind.

Outside the rally, a line of the president’s supporters wearing T-shirts and waving Trump flags snaked around several downtown blocks, cheering and contributing to a festive atmosphere. But nearby, members of a group who had gathered to protest Trump’s policies said they were upset and angered by the president’s behavior toward McCain.

“A person of McCain’s caliber needed to be honored in his death,” Lydia Johnson, a retired public relations executive, said as she stood in the hot sun. She said she did not agree with everything the Arizona senator believed. But, Johnson added, “He would say sorry when he realized he made a mistake.”

After the rally, Trump was immediately told by White House staff members that the event had broken attendance records, according to a person with knowledge of the exchange. He was accompanied by Corey Lewandowski and David Bossie, two trusted allies.

The president, once again sated, flew back to Washington in high spirits.