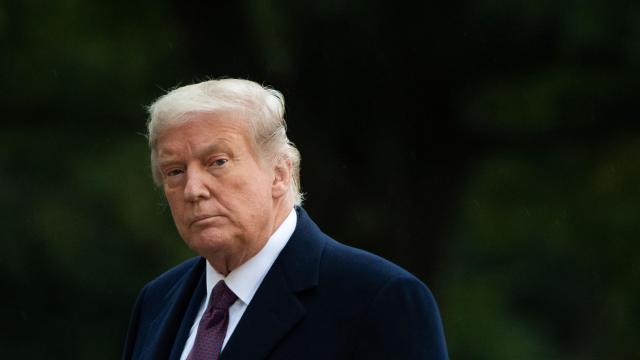 The development came roughly 15 hours after Trump disclosed he had tested positive for coronavirus. The White House described the move as precautionary and not the product of an urgent deterioration in Trump's condition.

Trump walked out of the White House residence at 6:16 p.m. ET -- his first public appearance since announcing his diagnosis -- wearing a mask and a suit. He walked on his own, without assistance, and displayed no outward signs of illness.

He waved to the media but did not stop to talk. Chief of staff Mark Meadows, also in a mask, followed.

There has been no transfer of power to Vice President Mike Pence, said White House spokeswoman Alyssa Farah. "The President is in charge," she said.

Trump flew aboard his Marine One helicopter to the hospital. It is routine for the President to travel to Walter Reed aboard Marine One.

In a statement, the President's spokeswoman said Trump "remains in good spirits, has mild symptoms, and has been working throughout the day."

"Out of an abundance of caution, and at the recommendation of his physician and medical experts, the President will be working from the presidential offices at Walter Reed for the next few days," press secretary Kayleigh McEnany said. "President Trump appreciates the outpouring of support for both he and the First Lady."

An administration official said Pence was working from his residence at the Naval Observatory and remains in good health.

Trump has had a fever since Friday morning, a person familiar with the matter said, though an official said the fever remains consistent with the White House's description of "mild symptoms."

Earlier in the afternoon, Trump's physician wrote in a memo he "remains fatigued but in good spirits."

"He's being evaluated by a team of experts, and together we'll be making recommendations to the President and First Lady in regards to next best steps," Navy Commander Dr. Sean Conley wrote.

He said Trump had been administered a Regeneron polyclonal antibody cocktail and has been taking zinc, vitamin D, famotidine, melatonin and a daily aspirin.

The decision to give Trump an experimental monoclonal antibody cocktail illustrates how concerned the White House may be about his Covid-19 diagnosis, Dr. Jonathan Reiner, CNN medical analyst and professor at George Washington University, told CNN on Friday.

"The big news there is that he got an experimental drug. He got a drug not approved by the FDA," said Reiner, who has treated former Vice President Dick Cheney.

The memo also said first lady Melania Trump remains well with only a mild cough and headache, and the remainder of the first family is well and have tested negative.

The President disclosed in the early morning hours on Friday that he and the first lady had tested positive for coronavirus.

The development threw the country's leadership in turmoil and lent new uncertainty to the unfolding presidential race.

Moments before news broke that Trump was heading to Walter Reed, Democratic presidential nominee Joe Biden said he was suspending negative advertising for the time being.

The Gang of Eight -- top leaders of Congress and top lawmakers on the House and Senate intelligence committees -- have not been briefed on Trump's health, according to two sources familiar.

The group typically gets briefed on classified intelligence and national security matters, the sources added.

Two officials from two previous administrations tell CNN that the "presidential offices" consist of a suite of rooms on the sprawling campus of Walter Reed, including: a sitting room, a conference room and a hospital bedroom.

But the officials, one Democrat and one Republican, both said the explanation in McEnany's statement stood out to them as curious. The offices are not dedicated for presidential use only, but the suite of offices is a place where presidents can go while they are on the medical campus.