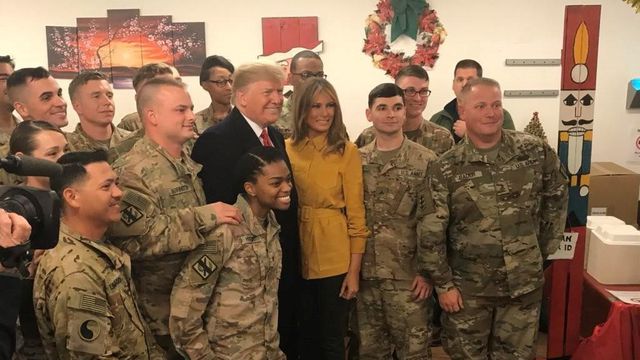 (CNN) — President Donald Trump and the first lady quietly swept into Iraq Wednesday to pay a holiday visit to US troops, making good on the President's promise to travel to one of the American war zones he has derided as costly blunders.

After a secret overnight flight from Washington, the President and Melania Trump touched down onto a darkened air strip at Al Asad Air Base west of Baghdad, the dicey security situation still restricting Trump to a clandestine visit more than 15 years after the American invasion.

A photo tweeted by the President's spokeswoman showed Trump in a black overcoat and red tie, posing for a photo with troops in uniform. Mrs. Trump stood smiling next to him, wearing a mustard-colored blouse.

Trump left behind a slate of troubles in Washington, including a partial government shutdown and an unsteady economy. He's also faced criticism for a series of foreign policy decisions that have left his national security team at odds.

Trump has sought to distance himself from the foreign entanglements he describes as foolhardy mistakes made by his predecessors, including the war in Iraq. He recently ordered a drawdown of the 14,000 US troops in Afghanistan, and a complete withdrawal of 2,000 troops from Syria.

He hasn't stated plans for the 5,000 or so American troops in Iraq who returned to the country in 2014 to battle ISIS. According to Reuters, Trump said in the country on Wednesday he had no plans to pull troops from Iraq.

But regardless of whether Trump likes the wars or not, they are now his; the lives of the young men and women stationed abroad subject to his decisions, whims and orders. And as such, the commander in chief was fulfilling what is viewed as an essential duty in paying them a surprise Christmastime visit.

George W. Bush made four trips to Iraq after ordering American troops into the country in 2003. Barack Obama visited once. Both men also traveled multiple times to Afghanistan.

Trump's visit comes at a fraught moment for the President and the military. Trump's defense secretary resigned last week after the Syria troop decision, writing in a departure letter the President deserved a military chief more aligned with his worldview. His replacement, a former Boeing executive, has scant foreign policy or military experience.

Trump had faced scrutiny for putting off a visit to the troops. Privately, he wondered whether such a trip would only serve to highlight wars he does not support and wants to end. But in November, after facing criticism for canceled a visit to a military cemetery in France because of rain, Trump announced he would soon travel to a war zone.

Like presidents before him, Trump's visit was shrouded in secrecy. He departed the White House quietly on Christmas night and details of his travel were very closely held within the West Wing.

A decade-and-a-half after the start of the US war, which has cost nearly 5,000 American troops their lives, Iraq remains a dangerous place.

The American-led invasion in 2003 toppled Iraqi President Saddam Hussein, but for several years afterward US troops engaged in extended fighting across the country, battling an insurgency and later sectarian violence. At their peak, US troop levels in Iraq stood near 166,000. After the combat mission ended in 2010, some troops remained behind to help stabilize the country.

Thousands more returned four years later to battle ISIS. Iraq formally declared victory against the terror group a year ago, but US troops have remained to help stabilize regions of the country and train Iraqi soldiers.

Trump criticized his predecessor, Obama, for withdrawing troops too quickly from Iraq, claiming it allowed for ISIS' rise. Obama's administration was unable to strike a deal with the Iraqi government to allow for a residual US force to maintain stability in the country. But in bringing troops home and declaring a formal end to the Iraq War, Obama fulfilled a pledge to voters to end a war that began under Bush.

Trump now finds himself eager to make good on his own promises to wind down US involvement overseas. That's what has driven his recent decisions to take US troops out of Syria and Afghanistan.

But those decisions have been unpopular among even his own national security team, including Defense Secretary James Mattis, who resigned last week. He was followed out the exit by Brett McGurk, the US special envoy to the anti-ISIS coalition who Trump claims not to know.

They and other officials warned Trump that leaving the region now would allow for ISIS, or another terror group, to regain a foothold. But the President was insistent that the time had come for US personnel to come home.