Predictions holding: NC to get 14th congressional seat after 2020 census 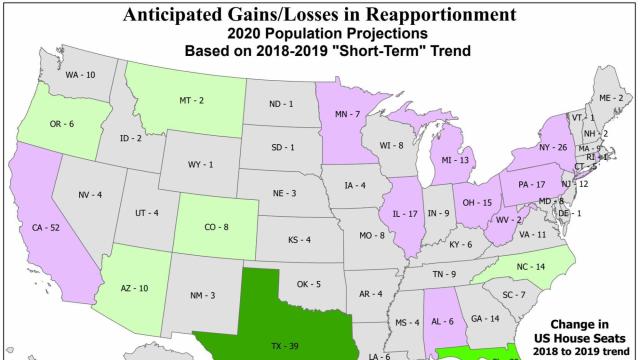 Raleigh, N.C. — North Carolina's population growth should give it another seat in Congress after the 2020 census, a national data group said this week.

The move, from 13 seats in the U.S. House to 14, has been widely expected for some time. It was reconfirmed by the latest population projections the U.S. Census Bureau released Monday, Election Data Services said in its report.

The prediction holds under several methodologies used to push population numbers forward to next year, when the census begins, and Monday's release is very similar to last year's projections, Election Data Services President Kimball Brace said in his report.

Nationwide, the gains and losses seem likely to boost Republican numbers in Congress, though much depends on how state legislatures around the country redraw congressional maps after the 2020 count. The numbers show a general population move toward southern states.

"Using any methodology, the population projections points toward a ten (10) seat change over 17 states across the nation by year 2020," Election Data Services said. "States that will gain single seats include Arizona, Colorado, Montana, North Carolina and Oregon, while Florida is set to gain two congressional districts and Texas would gain three seats. Single seat losses will again occur in the Midwest and Northeast sections of the nation, where Alabama, California, Illinois, Michigan, Minnesota, New York, Ohio, Pennsylvania, Rhode Island and West Virginia would each lose a seat."

Membership in the House of Representatives is capped at 435 voting members, and those are divided between the 50 states every 10 years after the census. In North Carolina, the General Assembly draws that map without input from the governor, a process that sparked repeated lawsuits over the last decade, including one that forced the Republican-controlled legislature to redraw the state's congressional map yet again in November.

Brace noted that the new numbers may be "majorly impacted by how well the Commerce Department and Census Bureau conducts the census, how well the American public responds to this decennial exercise, the first where major components will be conducted via the internet, and whether the discussion on citizenship over the past year will cause some groups to avoid participating."

President Donald Trump's administration has pressed to include a citizenship question on the coming census, but it was blocked by the U.S. Supreme Court and a lawsuit arguing that the administration hoped to intimidate Hispanic families and depress their count. That argument was bolstered when secret emails were revealed from a North Carolina map-maker named Tom Hofeller.

In those emails. Hofeller, who has since died, suggested key changes to the process would be "advantageous to Republicans and Non-Hispanic Whites."

Because electoral college votes allocated to each state are based on congressional seats, the new count will also affect future presidential races, but not until 2024, because it takes states time to redraw maps.

The census count begins in earnest April 1, and the Census Bureau hopes many people will use the internet for an initial response, though there are also telephone and mail options. Census takers will make follow-up visits to people's homes.

“We are now at a place where the rubber meets the road," Brace said in the report. "How well does the Census Bureau and the Trump administration put on the greatest mobilization of government resources outside of war time? How well will the public respond and answer the Census, given the competing focuses of everyday life and the need to utilize the internet?"